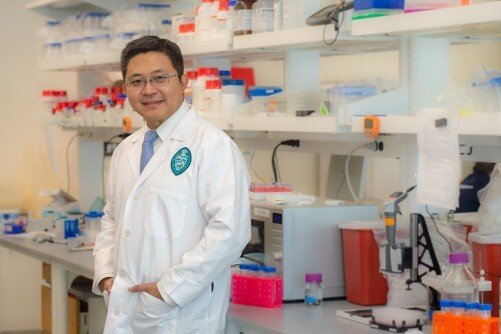 Tony Hu, PhD, is the Weatherhead Presidential Chair in Biotechnology Innovation and director of the Center of Cellular and Molecular Diagnosis at Tulane University School of Medicine. Courtesy of Paula Burch-Celentano

Led by Tony Hu, the Weatherhead Presidential Chair in Biotechnology Innovation at Tulane University School of Medicine, researchers at Tulane, Baylor College of Medicine and NanoPin Technologies, Inc. are now developing a rapid, reliable and highly specific test to allow rapid diagnosis of all forms of Tuberculosis (TB), the leading worldwide cause of death from infectious disease.

More than 10 million people contract TB each year, and the disease kills 1.7 million people annually. Efforts to control the global TB epidemic have had limited success, due to failure to identify and treat a majority of the individuals with active TB disease and partly because of the relatively poor ability of current diagnostic tests to recognize certain TB disease manifestations.

This research effort is being funded with a $3.8 million grant from the U.S. Army Medical Research Acquisition Activity office through the Peer Reviewed Medical Research Program in the Department of Defense to address health threats to military men and women deployed to overseas battlefields and on humanitarian missions.

Bacterial culture is still commonly used to diagnose TB and to identify drug-resistant TB cases in much of the world. However, bacterial culture tests can take several weeks to provide a final result and are unable to detect a substantial fraction of individuals with active TB disease, delaying the decision to start and end anti-TB treatments.

More recently developed molecular tests can reduce the time required for TB diagnosis, but also exhibit poor ability to detect certain manifestations of TB disease and are not useful in monitoring patient responses to anti-TB therapy.

“Our test has several advantages over currently existing TB tests, including the gold-standard of bacterial culture,” says Hu. “It requires only a small blood sample and directly measures TB-derived proteins to detect all forms of TB disease, including those missed by most other available TB tests. Notably, this approach can discriminate TB cases from those caused by related pathogens that produce similar symptoms but require different treatments.”

Hu’s test also indicates the severity of the infection and its response to treatment, using a streamlined approach suitable for high-throughput operation in clinical settings. This test uses equipment already approved by the FDA for other assays but can also be run on portable instruments suitable for use in resource-limited or extreme settings encountered during military and humanitarian missions.

Hu’s team has performed multiple pre-clinical studies with this method and is now partnering with researchers at Baylor and NanoPin Technologies, Inc. to screen the diagnostic performance of this test in a large population of patients with and without active TB using both FDA-approved equipment and a new portable system, and develop an optimized test kit suitable for regulatory approval.

“The company will standardize the production pipeline,” says Hu. “This will be highly translational if we’re successful.”

The U.S. Army Medical Research Acquisition Activity, 839 Chandler Street, Fort Detrick MD 21702-5014 is the awarding and administering acquisition office. This work was supported by the The Assistant Secretary of Defense for Health Affairs endorsed by the Department of Defense through the FY18 Peer Reviewed Medical Research Program/Technology/Therapeutic Development Research Award under Award No. W81XWH18PRMRPTTDA. Opinions, interpretations, conclusions and recommendations are those of the author and are not necessarily endorsed by the Department of Defense. In the conduct of research involving hazardous organisms or toxins, the investigators adhere to the CDC-NIH Guide for Biosafety in Microbiological and Biomedical Laboratories.