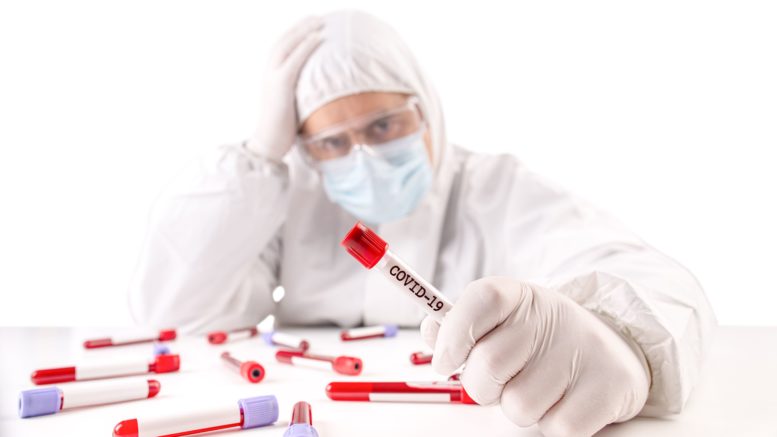 A new data-driven mathematical model of the coronavirus pandemic predicts that the United States will peak in the number of “active” COVID-19 cases on or around April 20, marking a critical milestone on the demand for medical resources.

“This indicates an important turning point that each country will reach in the COVID-19 pandemic, and we predict that the United States is on course to reach this point in the coming weeks,” said Ka-Kit Tung, a professor of applied mathematics at the University of Washington. “It is a point of maximum strain on a country’s health and medical infrastructure.”

The new model is intended to help health officials and policymakers see at least two weeks in advance how COVID-19 will likely strain medical infrastructure in the U.S. and around the world. It relies on the number of newly diagnosed cases and the number of individuals who have recovered or died in a geographic region — whether an entire country or a subnational level like a state or province.

Norden Huang and Fangli Qiao, both from the First Institute of Oceanography’s Data Analysis Laboratory in Qingdao, China, created the model with Tung. Their paper describing the analysis is not yet peer reviewed but has been submitted to a journal for consideration. Their study was posted March 30 to the preprint site medRxiv.

For the U.S., this model predicts that:

Their model also predicts that other hard-hit countries, such as Germany and Spain, have either recently peaked in active COVID-19 cases or will do so soon. The United Kingdom will not peak until the latter half of April, according to the analysis.

The model finds that the length of outbreaks will also vary by country. Germany and Italy will take a week longer than the city of Wuhan, China — the earliest epicenter — to reach their turning point in active COVID-19 cases. The United States is projected to take two weeks longer than Wuhan. Wuhan and Hubei Province were placed under strict lockdowns by the Chinese government early in the outbreak, which may explain the shorter course there, said Tung. Italy was slower to roll out lockdowns, first regionally and then nationally. The United States has no national lockdown, though a majority of states have issued stay-at-home orders.

The researchers tested the model’s efficacy using COVID-19 data from China. With an accuracy of a few days, their model predicted key events in the outbreak’s growth, spread and decline of COVID-19 in Wuhan, Hubei and the rest of China — including the peak of new cases, the peak of active cases and the subsidence of the epidemic. Wuhan’s 76-day lockdown was lifted April 8.

Scientists at the UW’s Institute for Health Metrics and Evaluation have created a separate data-driven model for COVID-19, which relies on other pieces of information about the pandemic, such as observed death rates. In contrast, the model by Huang, Qiao and Tung uses the number of newly diagnosed cases and the number of individuals who have recovered or died. The Institute’s model primarily projects COVID-19 deaths in a region, as well as the demand for hospital resources such as ventilators.

“Our two approaches complement one another, providing the projections that health officials and governments need to understand when the maximum strain on resources is coming, and to show how the course of the pandemic depends heavily on the level of social distancing measures adopted,” said Tung.

Compared to other modeling approaches, such as widely reported projections from the Imperial College London, the model developed by Tung and his colleagues does not require knowledge of the infection rate or the total number of infected cases — including asymptomatic individuals. These are difficult data to collect or estimate given the relatively sparse testing for COVID-19 in many countries, and the fact that most symptom-free or mildly ill individuals are not entering the medical system for treatment.

As a result of these and other key differences, the predictions by Huang, Qiao and Tung differ significantly from Imperial College London projections of a longer outbreak with 40% to 80% of the U.S. population infected and 1.1 to 2.2 million deaths. The results from the model used by Imperial College London differed significantly because it relied on separate assumptions about COVID-19 and the predictions were generated when key parameters, such as its infection rates, were unknown, according to Tung.

“Those types of models do serve purposes, such as moving policymakers into action,” said Tung. “But once the epidemic begins, it is important to turn to data-driven models that incorporate real-time information such as diagnosed cases, recovered cases and deaths — which reflect the effects of policy decisions and the degree of compliance — so that we can more realistically project the pandemic’s course.”

Be the first to comment on "U.S. Approaching Peak of ‘Active’ COVID-19 Cases, Strain on Medical Resources, New Modeling Shows"