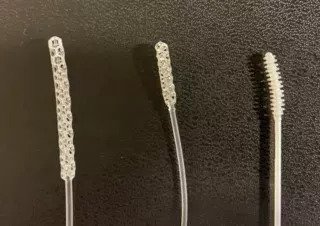 Not all swabs are alike. Some have fibers woven around the tip, similar in appearance to cotton swabs found in stores for consumer use, but made with longer shafts and sterile, spongy materials. But to meet the rapidly growing need for testing, the quickest-to-produce swabs consist of a single plastic material from tip to tip, with a lattice or a honey dipper design to collect a sample at one end. Courtesy of Gabe Oland

When the COVID-19 outbreak became a pandemic, and the scarcity of testing supplies became a crisis, the leaders of UCLA Biodesign saw the experience and background of Gabriel Oland, MD, as the ideal combination to help reinforce one link in the strained supply chain: the nasopharyngeal swabs used to collect patient specimens for testing.

With quick action and a collaborative effort, UCLA Health now has a protocol approved by the institutional review board (IRB) and launched this week a validation study of new swabs.

Oland, a general surgery resident at UCLA David Geffen School of Medicine and a fellow in the UCLA Biodesign program, has been working to develop a noninvasive intracranial pressure monitoring device. But with his medical and surgical experience – including treating COVID-19-positive patients – his undergraduate degree in biomedical engineering, his familiarity with production methods like 3D printing and injection molding, and his innovative work in the UCLA Biodesign program, he seemed to be the right person to bring together manufacturers and clinicians to rapidly address the issue of dwindling supplies of testing swabs.

Largely because of skills he honed during his UCLA Biodesign fellowship year, and in lieu of his externship, Oland was asked by Desert Horse-Grant to be her co-lead on the COVID-19 test swab task force.

“With Gabe’s understanding of medicine, engineering and business, he has the expertise to think through COVID-19 obstacles and outsmart them with the right experts,” said Horse-Grant, senior director of UCLA Health Research and Innovation and co-executive director of UCLA Biodesign.

“Compared with everything else that goes into testing, nasopharyngeal swabs are a relatively simple component,” said Oland. “But testing can’t happen without them.”

In April, he researched manufacturing companies – many of which were not medical-grade manufacturers – working with them, and in some cases giving them design feedback, so they could develop and mass-produce swabs that are safe and may be effective for clinical use. Because the Food and Drug Administration, which normally requires lengthy and thorough testing and validation of new medical products, has been inundated hospitals and manufacturers have been mandated to take on the additional responsibility of validating these products themselves so that they can then provide supportive data to the FDA retroactively, Oland said.

“Many entities have completely pivoted in what they’re doing. Some print consumer goods; others print jewelry and athletic wear. It’s difficult for these companies to make the transition to making medical-grade equipment, yet most of them are also manufacturing more or less at cost, with no intention of trying to gain economically from their contributions,” he said.

“The most fascinating is how quickly industry, healthcare systems and regulatory agencies alike have had to adapt and be flexible, given the time constraints that we’re under,” said Oland, who will help lead clinical evaluations of new swabs this week.

Not all swabs are alike, and not all can be mass-produced on 3D printers. Some have fibers woven around the tip, similar in appearance to cotton swabs found in stores for consumer use, but made with longer shafts and sterile, spongy materials. But to meet the rapidly growing need for testing, the quickest-to-produce swabs consist of a single plastic material from tip to tip, with a lattice or a honey dipper design to collect a sample at one end.

“Given that it’s only using one material, 3D printing is perfect for rapid output,” Oland said.

Pathologist Omai Garner, PhD, who directs clinical microbiology testing for UCLA Health, said, “Testing is our way out of this crisis, and as a country, we haven’t even scratched the surface of the amount of testing we need to be able to do.”

Garner’s team, which previously used about 200 swabs a day, now needs another 500 daily for COVID-19 testing alone and expects they’ll need twice that number over the next few weeks as testing ramps up.

“The scale at which we need swabs is something that’s never been seen before,” Garner said, adding that every person who is symptomatic for COVID-19 needs to be tested quickly, with results provided within 24 hours.

“At UCLA, we’re also exploring how we can test patients who may be asymptomatic and are coming into our hospitals for procedures, potentially exposing our workers to infection,” Garner said. “UCLA Health is among the best in the country for many procedures, and we want to ensure continuity and future success by making appropriate COVID-19 testing available.”

While hospitals and patients are desperate for testing supplies that will save lives, the new swab manufacturers need validating data from the medical community to eventually obtain FDA approval to continue their work.

“Once the FDA gives their approval to the best-performing swabs, health systems won’t need to do as much clinical validation in-house. We’ll be able to start using the tests right away, potentially up to a few thousand a day at UCLA alone. I anticipate that very soon, extremely high-throughput testing will be available nationwide. We are facing tough times, but we also have many reasons to be optimistic – the challenges we’re dealing with pose a unique opportunity for growth, and everyone with whom I’ve been working has risen to the occasion,” Oland said.

“UCLA Biodesign innovators like Gabe immediately turned their attention to resolving some of the most pressing problems brought on by the quick spread of COVID-19 and the dramatic spike in demand for testing and other supplies,” said Johnese Spisso, president of UCLA Health, CEO of UCLA Health System, and a member of the UCLA Biodesign Program Advisory Board.

Be the first to comment on "UCLA Biodesign Fellow Focuses Surgical, Medical and Biomedical Engineering Insights on a Weak Link in COVID-19 Testing: Swabs Shortage"