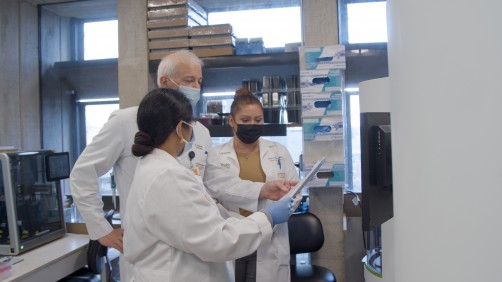 A team of University of Miami researchers working to detect variants of the novel coronavirus has found that approximately 25 percent of COVID-19 positive patients in the past two weeks were stricken with the more contagious U.K. variant. In addition, they have found three samples of the Brazilian variant, which could be one of the first times that strain has been identified in South Florida.

This comes amidst an overall decline in cases of COVID-19 across the Sunshine State that began the second week of January and has slowly decreased since then.

David Andrews, MD, an associate professor in the Department of Pathology and Laboratory Medicine at the Miller School of Medicine, is leading the University’s variant tracking initiative. His team has tested nearly 500 COVID-19 positive samples from patients at UHealth Tower and Jackson Health System’s three hospitals, and students, faculty and staff since mid-January.

“We are seeing a small potpourri of variants out there,” said Andrews, who is also vice chief of pathology for Jackson Health System. “We’ve encountered the California variant, the U.K. variant, and a number of variants of concern. But this is what one would expect from Miami-Dade County, which has such an international population.”

With new mutations of COVID-19 emerging weekly, Andrews’ team is harnessing the Miller School’s scientific expertise to understand how the novel coronavirus is evolving. While one group of molecular microbiologists is using cutting-edge strategies to determine how prevalent the variants are, another is working to genetically sequence as many of the COVID-19 positive samples as they can to learn whether new strains of the virus are circulating locally.

“I’d like to think that by looking actively and early at genetic variants that we’ll be able to be proactive and catch things ahead of time,” said Andrews. “This will be a lot easier to handle with knowledge, rather than backtracking. We’re trying to stay ahead of the curve, and it’s very important to do that now.”

The University is one of a handful of academic medical centers across the United States testing its COVID-19 samples for the variants and sequencing them. Although the Centers for Disease Control and Prevention (CDC) has contracted with private companies and some academic institutions to help them sequence the virus, the Miller School is doing this independently of that effort at the moment, as part of its research on emerging infections, said Stephen D. Nimer, MD, director of Sylvester Comprehensive Cancer Center, who developed the University’s COVID-19 testing program for patients and employees.

Meanwhile, according to the CDC, Florida currently has the largest share in the nation of the very contagious U.K. variant, with 489 cases confirmed, as well as detection of the Brazilian variant. The University’s latest findings would add to these figures.

“Because of our geographic location, it’s very important for us to develop these capabilities,” Nimer said. “If we are able to find other variants, we can then determine whether they are covered by our vaccines and whether they actually cause more severe disease, and all of this information is helpful for the world to know.”

So far, most of the vaccines available will still provide partial protection against the variants, so they are a critical pathway to ending the pandemic, UM experts said.

Andrews’ variant-tracking team includes two different labs on the Medical Campus that are part of his surveillance study. While one lab is analyzing samples from the University community, another is focusing on hospital patients. As part of the study, all of the student and patient information is de-identified, Dr. Andrews noted.

University scientists are searching for variants in two ways. After the COVID-19 positive samples are separated, the pathology lab splits each sample in half. One half of the sample goes to the lab of Emmanuel Thomas, MD, PhD, research associate professor, who uses targeted PCR testing to determine whether that patient has the U.K. variant, also known as B.1.1.7. Soon, they will also begin testing for other well-known variants, like the South African and Brazilian ones, Andrews said. This operation takes about 24 hours for results. The lab is currently processing about 100 samples each week but will increase its capacity with time.

“So far, we are seeing close to 25 percent of the U.K. variant among patients; and fortunately, in the students, there are very low numbers of that variant,” Andrews added.

However, Andrews cautioned that they have only processed about 500 samples. Once more are analyzed, they will have a better way to predict how much of the known variants are circulating in the patient and University population.

A third of the COVID-19 positive samples are also taken for genetic sequencing, a more labor-intensive operation done at the Onco-Genomics Shared Resource lab at Sylvester. Led by Sion Williams, PhD, a research assistant professor in the Miller School’s Department of Neurology, the team of scientists is sequencing about 50 to 60 samples per week. This process takes five days because it includes generating data from each sample and feeding it into a global public database to determine whether that sample has a similar lineage to known variants or is an entirely new one. Anthony Griswold, Ph.D., research assistant professor from the Miller School’s Department of Human Genetics, is also working on accelerating this process so that analysis can be done on campus. Despite the complexity, Nimer, Andrews, and Williams know that sequencing is a critical part of the effort to combat COVID-19.

While they have only sequenced samples from hospital patients, they have found three samples of the Brazilian variant since they began — two in the past week, as well as some other rare variants of COVID-19 from New York, Saudi Arabia, Aruba, and Israel. Williams believes it is vital to do more sequencing because local variants may emerge, with unique characteristics that healthcare professionals could be alerted about ahead of time.

“We have very quickly seen the value of doing this because we have seen there are strains we need to watch in our community,” said Williams, a molecular biologist whose lab also provides genomic services for the Center for AIDS Research. “The public data being generated in America on viral strains was pitifully low. But as a nation we can’t see what’s going on until people sequence and share their samples.”

With time, Andrews said he is hoping to expand the initiative, and is using the expertise of faculty members and labs in the Department of Human Genetics and the John P. Hussman Institute for Human Genomics for more sequencing firepower. Williams pointed out that the University’s effort could help inform South Florida government leaders about strains of concern locally, as well as whether they are seeing a new variant that could contribute to another surge. Sequencing data could also help leaders know when more restrictions may be needed, as well as whether expanded variant testing is necessary.