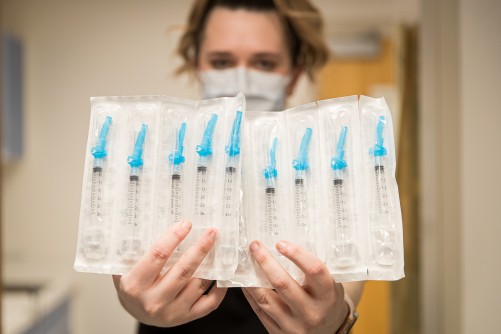 A nurse at the University of Northern Colorado's Student Health Center holds up vaccine needles. Courtesy of Woody Myers/UNC

Nick Pullen, PhD, an associate professor of Biological Sciences at the University of Northern Colorado (UNC), shares his expertise on the COVID-19 vaccines and debunks some of the myths surrounding them. Pullen, who is also a member on the American Association of Immunologists (AAI)’s Education Committee, focuses on researching the body's immune response, specifically chronic inflammation, asthma and allergies. He also heads the Inflammation Lab at UNC that studies mast cell biology, inflammatory modulation and immune-cell dynamics in cancer.

Traditional vaccines for viruses use a harmless, weakened full-virus particle that has been either killed or attenuated in some way where it cannot replicate anymore inside a human body. After receiving a vaccine, the body develops an adaptive immune response against those particles, for example, by deploying virus-specific antibodies. The antibodies are a surveillance system that neutralizes any future virus particles that try to invade the body and infect cells. This in turn prevents illness. The immune system maintains a stock of antibody-producing cells for each pathogen or vaccine it has trained against. This stock is known as immunological memory and can last years, depending on the form of vaccine and type of pathogen.

For example, the smallpox vaccine eradicated the disease to where nobody receives the vaccine anymore. “People nowadays don't really appreciate how terrible a disease smallpox was, since nobody gets the disease anymore because the vaccine put it out of business,” he said.

The Johnson & Johnson vaccine is similar to a more traditional vaccine and was recently approved by the U.S. Federal Drug Administration (FDA). It is administered in a single dose and was shown to be 85% effective in preventing severe COVID-19 illness a month after injection.

This vaccine uses a modified piece of DNA coding for a SARS-CoV-2 identifier (also known as an antigen) delivered with a completely different virus (an adenovirus particle), which itself has been made so that it cannot replicate inside the human body. In other words, the adenovirus is a messenger that delivers the instructions to train the immune system against SARS-CoV-2 without causing an infection. These antigens are what the immune system recognizes and develops antibodies against, which over time increases a person’s immunity to that particular virus strain. In the case of the Janssen COVID-19 Vaccine, the adenovirus delivers instructions to make antibodies against portions of the SARS-CoV-2 spike protein.

The Moderna and Pfizer-BioNTech COVID-19 vaccines are considered to be breakthroughs in vaccine science by utilizing messenger ribonucleic acid (mRNA). This type of vaccine differs from traditional vaccines because the mRNA instructions that direct cells in the body to make proteins to prevent or treat diseases are delivered in an even simpler way. Additionally, these vaccines can potentially be modified much more quickly in response to evolving viral strains.

Pullen describes the process: Imagine the mRNA vaccines packaged in a bag, and that bag is made out of fatty acids (oily lipids), which are injected into your body. Inside that lipid bag are the instructions that will direct your body’s cells to make proteins (also known as peptides).

Once the mRNA is injected into your body, the lipid bag hooks onto your cells and opens. The contents of the bag are then released into your cells, and the mRNA within that bag eventually translates into the peptides. Once that peptide is made in your cells, it’s ‘shipped out’ of the cells and essentially notifies your adaptive immune system. Your immune system then responds by developing specific antibodies and releasing them in anticipation of the perceived threat.

“If you don’t get that second dose, you’ll probably have a little bit of memory in terms of making antibodies from what we call B cells, but it might not be as great as it could be or stimulate as quickly,” Pullen said.

One of the most common side effects of receiving a COVID-19 vaccine is soreness around the injection site. Pullen said having a sore arm is a “good thing because it indicates that your innate immune system is sending up smoke signals and ringing alarm bells to the adaptive immune system to take over in handling what caused that inflammation.”

Pullen said that a person needs to get the two vaccine doses to boost the adaptive immune system’s memory response to the virus. In order to do this, it has to be informed by the innate immune system’s initial alarm bells and smoke signals.

So, when will humans be immune to COVID-19 and be able to return to a form of normalcy? It’s difficult to say because each virus operates differently in terms of rates of contagion, infection and other areas.

For example, measles has become problematic in various areas of the world including the U.S. and United Kingdom. As more people decide not to get vaccinated against it due to false information or other concerns, then more people will find themselves infected with this disease, which can be easily controlled by adequate vaccination.

According to the World Health Organization (WHO), “Measles surged worldwide in 2019 reaching highest number of reported cases in 23 years. Highlighted in a publication by WHO and the Centers for Disease Control and Prevention (CDC), measles cases worldwide increased to 869,770 in 2019, the highest number reported since 1996 with increases in all WHO regions. Global measles deaths climbed nearly 50% since 2016, claiming an estimated 207,500 lives in 2019 alone.”

The main driver of these increases is the “failure to vaccinate children on time” with the measles vaccine, according to the report.

“What we’ve noticed is that for herd immunity to continue, around 95% of people need to be vaccinated in order to keep measles ‘out of business,’” Pullen said.

Every disease is different when it comes to the number of vaccinated people needed to achieve herd immunity worldwide.

Since COVID-19 vaccines are still rolling out, it’s hard to put an exact number on the percentage of the population that needs to be vaccinated in order to achieve herd immunity. “My response would be that at least 85% of the population needs to get vaccinated against COVID-19 in order for herd immunity to really take effect, but that’s a conservative hypothesis. Really, we just don’t know yet. This is an active area of epidemiological research, and I’ve seen legitimate estimates from 50% to 80%. I believe it doesn’t hurt to aim as high as possible.” Pullen said.

This plays into concerns about the growing number of COVID-19 variants surfacing. Pullen said that experts don’t know exactly how all the variants will impact the effectiveness of COVID-19 vaccines currently being administered in the U.S.

“There are some studies in peer review right now that are looking at this, and even Dr. Anthony Fauci (director of the National Institute of Allergy and Infectious Diseases) recently said that some of the vaccines are 20% or 30% less effective against these new strains, but that doesn’t mean they’re ineffective,” he said.

Despite the unknowns, the mRNA vaccines are easier to modify where immunologists can quickly reconfigure some of the mRNA to match the COVID-19 variants, which is not as easily done with more traditional vaccines involving whole virus particles.

Pullen said it’s vital that researchers and public-health officials continue to keep a close eye on these variants especially since adenoviral vaccines are being distributed.

As more vaccines are distributed to the masses, the likelihood of dealing with COVID-19 for a long time remains high and will most likely be dealt with seasonally, much like influenza.

“If we don’t decrease the number of COVID-19 variant cases, then there’s going to be further mutations and cases,” Pullen said. “I’d hope that we could get back to some type of normal and treat COVID-19 like we treat the seasonal flu.”

Even though countries continue to deal with the impacts of COVID-19, a silver lining has emerged. Because of the mass practicing of public-health guidelines including wearing masks, practicing social distancing and avoiding gatherings, this year’s influenza season has seen a vast decrease in hospitalizations and severe cases worldwide.

Because there hasn’t been as many people experiencing severe cases of influenza this season, it demonstrates how less contagious influenza is; however, this also indicates how much more contagious COVID-19 is in comparison.

“We have evidence now that over the course of two flu seasons (one in the Southern hemisphere and the one happening now in the Northern hemisphere), there have practically been no severe cases of the flu, yet COVID-19 has led to millions of deaths,” Pullen said. “This demonstrates how much worse, more virulent, COVID-19 is in comparison to the flu.”

This also provides more basis on why getting people vaccinated against COVID-19 is a priority for public-health officials. However, despite the evidence, conspiracy theories continue to run rampant, causing many people to become misinformed and decide not to get vaccinated because of false information.

- “The mRNA vaccines will mutate your DNA.”
- “I’ve looked into this very carefully, and it’s impossible. The virus doesn’t do that and there’s no virus in those mRNA vaccines, only instructions to make a non-infective piece of it.”

According to the CDC, mRNA vaccines work by instructing cells in the body how to make a protein that triggers a virus-specific immune response. Injecting mRNA into your body will not interact or do anything to the DNA of your cells. Human cells break down and get rid of the mRNA soon after they have finished using the instructions.

“The vaccines have the virus in them, so they will infect me with COVID-19.”
“The mRNA vaccines literally have no virus in them and have no way of building the virus in the human body. The AstraZeneca and Johnson & Johnson vaccines don’t have COVID-19 in them, it’s a completely different type of virus that won’t replicate inside of you.”

"COVID-19 vaccines contain a microchip that tracks the location of the patient."
"This idea grew in popularity due to social media circulation of a news video clip taken out of context. The interviewee was discussing a possible method for tracking the packaging and delivery of vaccines to clinics (e.g., enhancing supply chain efficiency in getting doses distributed more accurately and equitably) and determining in real time how many doses were administered. He was not referring to any tracking device in the actual vaccine dose.

"Also, I am unaware of any serious technology at that scale that would make this possible (I have longstanding collaborations in bioengineering). Additionally, it’s notable that the delivery tracking system discussed in that video isn’t even used by any of the available vaccines. As far as I’m concerned, it was a purely theoretical sales pitch being made on T.V. that was co-opted into a conspiracy theory."

Pullen’s advice to those who are hesitant in or unsure about getting a COVID-19 vaccine is to talk with their healthcare providers and contact peers, family and friends who have already received their vaccines and ask them about their experiences. He also encourages those who have questions about these topics to directly read information published by the CDC, WHO, NIH and their local health departments and organizations, such as the AAI. He strongly discourages going deep into anything posted on social media or non-peer-reviewed websites.

As more people get vaccinated, a sense of normalcy can start to take shape once more. “You can sit at the bar again, have normal celebrations with family and friends, we won’t have to use these crazy reservation systems when going to a restaurant or other places,” Pullen said. “These routines and behaviors are important for us, and we can return to the good times if everyone gets on board with these vaccines, and then keeps up the mask-wearing and distancing until we achieve a reasonable level of immunity in the population. I look forward to that day, and I hope we will be in the home stretch soon, but we have to maintain our vigilance and get vaccinated for that to happen.”