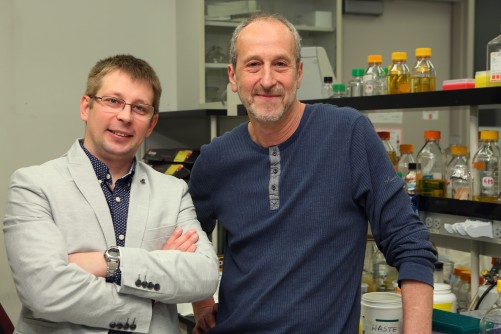 New high-resolution structures of the bacterial ribosome determined by researchers at the University of Illinois Chicago show that a single water molecule may be the cause — and possible solution — of antibiotic resistance. The findings of the new UIC study are published in the journal Nature Chemical Biology.

Pathogenic germs become resistant to antibiotics when they develop the ability to defeat the drugs designed to kill them. Each year in the U.S., millions of people suffer from antibiotic-resistant infections, and thousands of people die as a result.

Developing new drugs is a key way the scientific community is trying to reduce the impact of antibiotic resistance.

“The first thing we need to do to make improved drugs is to better understand how antibiotics work and how ‘bad bugs’ become resistant to them,” said Alexander Mankin, professor of pharmaceutical sciences at the UIC College of Pharmacy and co-author of the paper.

Mankin and his colleague, Yury Polikanov, associate professor of biological sciences at the UIC College of Liberal Arts and Sciences, have been studying the mechanism of action of one of the most popular types of antibiotics used in the clinic today — macrolides.

“Macrolides are among the most successful antibiotics that are commonly used to treat infections that spread in the community — people get macrolide antibiotics, like azithromycin, for example, all the time,” said Polikanov, the corresponding author of the paper. “Macrolides work by entering bacteria and binding to the ribosomes, the protein synthesis machine of the cell. Once bound, the drug prevents ribosomes from making new proteins, thereby stopping bacteria from growing and replicating. However, resistant bacteria change their ribosomes so that the drug cannot bind to them anymore.”

Through years of partnership between their two labs, the UIC researchers were able to understand how macrolides bind to the ribosome, how bacteria respond to macrolides and how they become resistant to these commonly used drugs. They also learned how to capture high-resolution images of the ribosomes invaded by antibiotics.

The water molecule, the researchers found, acts as a bridge between the ribosome and antibiotic. When resistant bacteria change the chemical makeup of their ribosomes, this bridge between the ribosome and the drug cannot be built. While the scientific community has long guessed that differences in the structures of the sensitive and resistant ribosomes were important — why these changes prevent drug action was previously unknown.

“This study offers the first convincing explanation of why macrolides are unable to bind to ribosomes of the resistant bacteria,” Mankin said.

“We are very much excited by this discovery,” Polikanov said. “Because we now know how exactly macrolide antibiotics interact with their target, the ribosome. This discovery is important because it will inform and facilitate the development of new antibiotics that do not need this water molecule for binding. There is a huge demand for such drugs that are able to kill even those bacteria that became resistant to the currently used drugs.”

Co-authors on the paper are Maxim Svetlov, Egor Syroegin, Elena Aleksandrova of UIC, Gemma Atkinson of Umea University, and Steven Gregory of the University of Rhode Island.

Source: University of Illinois at Chicago