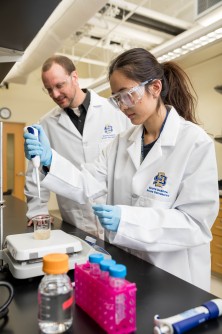 The tuberculosis-mimicking particles on the right are very similar in shape and size to the Mycobacterium tuberculosis pathogens on the left. Courtesy of Jean-Pierre Tissier, Medical Express

Microparticles that mimic the behavior of the tuberculosis bacteria may one day hold the key to eradicating the disease, according to South Dakota State University assistant professor of pharmaceutical sciences Joshua Reineke.

He will collaborate with researchers from two South African universities to determine how to use the microparticles to treat TB through a five-year, $1.7 million National Institutes of Health R01 grant.

TB pathogens survive and replicate inside the same macrophages that are supposed to engulf and kill the invading bacteria, Reineke explained. To do this, the pathogens initiate a signaling pathway to prevent the macrophages from destroying them and to avoid detection by other immune system cells.

The researchers plan to load microparticles Reineke developed with drugs designed to activate the macrophages in which the TB bacteria hide. “We are treating the macrophages to help them be more efficient at clearing TB from the body,” he said.

For the NIH project, Reineke will work with associate professor Admire Dube of the University of Western Cape School of Pharmacy and professor Samantha Sampson at the DST/NRF Centre of Excellence in Biomedical Tuberculosis Research at Stellenbosch University, which leads the project. Dube’s research focuses on anti-TB nanoparticles, while Sampson uses TB models to evaluate the therapeutics’ effectiveness.

SDSU will receive $428,317 in funding for the project. Doctoral student Ailin Guo, who helped develop the microparticles using metal organic frameworks from Institute of Porous Materials in Paris, will work on the NIH project and Reineke is seeking another doctoral student to join the group.

More than 9,000 new TB cases were reported among Americans in 2018, according to the Centers for Disease Control and Prevention. The South Dakota Department of Health recorded 12 new cases of TB that same year.

“Although TB is a serious disease, it is treatable,” Reineke explained. Because the treatment protocol is complex and lengthy, poor patient medication adherence has resulted in the development of multidrug-resistant tuberculosis.

In addition, approximately 90% of those affected by TB have the latent form, Reineke said. Those with latent TB are not sick and cannot transmit the disease, but they have a 5 to 15% lifetime risk of developing the disease.

Because the drug-loaded microparticles will trigger the immune system’s TB-fighting capabilities, he anticipates the therapeutics will work on drug-resistant and latent TB. Sampson at the Stellenbosch University’s Biomedical Tuberculosis Research Center “is enabling us to test our therapeutics in these unique disease sets,” Reineke said.

“If we can treat latent TB prophylactically, we can potentially reach the long-term goal of eradicating TB,” he pointed out. “That’s what’s really exciting and why NIH had an interest in our project.”

“This is one of three international collaborative grants funded under this NIH request for proposals. This is a significant accomplishment,” noted professor Om Perumal, head of SDSU’s Department of Pharmaceutical Sciences.

Reineke is the first College of Pharmacy and Allied Health Professions faculty member to receive an international collaborative RO1 grant. Two other faculty members have R01 grants involving collaborators within the United States. An RO1 grant allows the researchers to apply for a continuation award during the final year of the project.

“Receiving this type of grant is one of those big career goals and I am very excited about it,” Reineke said. Perumal added, “Overall, these RO1 collaborative grants signify the growing research program in pharmaceutical sciences.”

“This is a really good example of a collaborative effort in which a lot of individuals helped make this happen,” Reineke said, acknowledging state, university and departmental support for his tuberculosis research.

Be the first to comment on "Using Microparticles to Eradicate Tuberculosis"