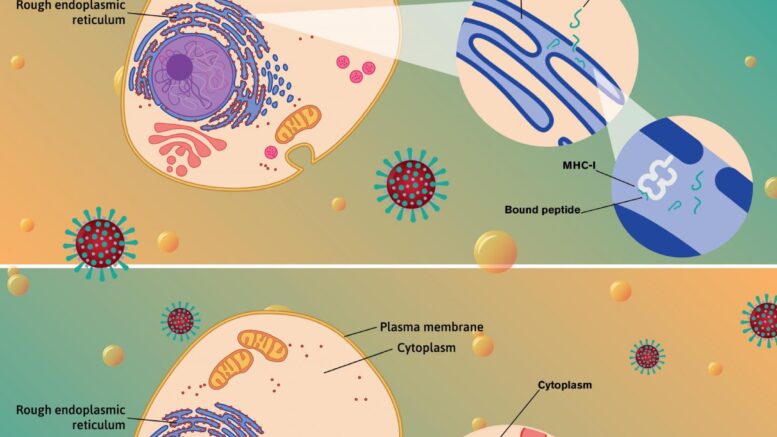 Graphic showing the chain of events when a cell is infected with a virus like SARS CoV-2. Within a living cell, proteins derived from pathogens like viruses are cut into fragments in the proteosome. These fragments then migrate through a series of cell structures, including the endoplasmic reticulum and the Golgi apparatus. When these peptide fragments bind with the MHC-I complex, they can be presented to CD+8 T cells at the cell surface. Should CD+8 T cells determine that the peptides belong to an alien entity like a virus, they will kill the cell to help stop the spread of viruses to other cells. This is an essential component of the adaptive immune response. Courtesy of Shireen Dooling, Biodesign Institute at Arizona State University

Of the many perplexing questions surrounding SARS CoV-2, a mysterious new pathogen that has killed an estimated 2.6 million people worldwide, perhaps the most insistent is this: why does the illness seem to strike in such a haphazard way, sometimes sparing the 100 year old grandmother, while killing healthy young men and women in the prime of life?

A new study by Karen Anderson, Abhishek Singharoy and their colleagues at the Biodesign Institute at Arizona State University, may offer some tentative clues. Their research explores MHC-I, a critical protein component of the human adaptive immune system.

The research suggests that certain variant forms of MHC-I can help protect the body, by stimulating a strong immune response, while others may leave an individual susceptible to viral assault, severe illness and possibly, death.

"The implication of our findings is that the capacity to mount a strong and diverse T cell response to SARS-CoV-2 may be important to limit disease severity," Anderson says. "The key to this work is using protein structure to predict individual MHC-I peptide binding capacity."

Humans, like all vertebrates, carry MHC-I molecules in all nucleated cells. A central role of MHC-I is to help the body clear infections from viruses and other pathogens. It does this by gathering fragments of the virus, ferrying them to the cell surface and presenting them to immune agents known as CD8+ T cells, which ceaselessly patrol the body.

MHC-I however, is a polymorphic molecule, meaning that it occurs in a wide variety of forms, which differ markedly in their ability to bind viral fragments and present them for interrogation by T cells. Depending on which MHC-I variants or alleles are present, the body may mount a successful immune response to SARS CoV-2, or may fail to do so, leaving the body vulnerable.

In new research appearing in the journal Cell Reports Medicine, Anderson, Singharoy and their colleagues describe a sophisticated algorithm known as EnsembleMHC, designed to predict which MHC-I alleles are best at binding viral fragments and presenting them to T cells. They also identify 108 viral peptides derived from SARS CoV-2 structural proteins, believed to be potent stimulators of the immune response.

"This is one of the first examples of molecular epidemiology with the SARS-CoV2 spike," says Singharoy. The scaling from molecular properties to population properties, developed by (first author) Eric Wilson is quite novel."

Wilson is a researcher at the Biodesign Institute and ASU's School of Molecular Sciences.

The research examines 52 common MHC-I alleles and finds significant disparities in their ability to bind viral fragments derived from the full SARS CoV-2 genome as well as fragments derived from a key subset of structural components believed to be the most important viral proteins for generating robust immune responses. These essential proteins help the virus assemble 4 critical structures and are known as the S (Spike), N (Nucleocapsid), M (Membrane), and E (Envelope) proteins.

CD8+ T cells are able to recognize docking regions on these structural proteins, known as epitopes. When these patrolling immune cells encounter S, N, M and E proteins, they will usually target the infected cell for destruction.

When the researchers compared COVID-19 figures from 23 countries, they found that mortality rates from the disease were closely associated with the distribution of MHC-I variants. Specifically, populations rich in MHC-I alleles ranked as strong binders of SARS CoV-2 peptide fragments showed reduced rates of death from COVID-19, suggesting these favorable MHC-I alleles generate a robust immune response when they encounter the novel coronavirus.

The work has important implications for monitoring vulnerability to COVID-19 in both individuals and populations and can also help researchers ferret out the essential pieces of the SARS CoV-2 pathogen that best stimulate the immune response, a critical component in future vaccines.

MHC-I molecules are generated by the MHC gene, which is the most polymorphic part of the entire human genome. MHC is known to encode over 160 proteins of diverse function, half of which are directly involved in immune responses. The enormous diversity of MHC-I proteins provide the body with a formidable early warning defense system, capable of binding a broad range of pathogen fragments and fine-tuning the immune response. The rich diversity of MHC-I molecules also makes it difficult for a foreign invader like a virus to stealthily outwit all of the potential binding molecules.

The CD8+ T cells conducting their surveillance have an uncanny ability to distinguish self from non-self. If the T cells don't like what they see, when antigen-presenting MHC-I molecules display the fragments they have acquired, the CD8+ T cells will terminate the infected cell.

Previous research has shown that even slight amino acid variances in MHC-I composition can have profound effects. On the one hand, some MHC-I forms may promote inflammatory and autoimmune diseases, such as Graves's disease, psoriasis, rheumatoid arthritis, or multiple sclerosis, in which healthy tissues are recognized as foreign. On the other hand, MHC-I variants may be structurally unequipped to bind the proper fragments of a virus or other pathogen and fail to mount an immune response. For this reason, MHC genotype is considered a critical determinant of patient outcomes following a range of viral infections.

MHC-I also plays an important role in cases of tissue transplantation, as its full name--major histocompatibility complex--suggests. If donated tissue is not compatible with the recipient, MHC-I molecules present fragments from the donor tissue, which are recognized as foreign and attacked by T cells, a phenomenon known as graft-host rejection, another form of autoimmunity.

In the current study, researchers examined 52 common alleles of the MHC-I protein, using a custom-designed algorithm known as EnsembleMHC to predict their binding affinities for SARS CoV-2 protein fragments. Two sets of data were compiled, the first, measuring each allele's binding affinity for the complete repertoire of proteins in the SARS CoV-2 genome. The second data set examines the binding affinities of each allele to just the S, N, M and E structural viral peptide candidates.

The researchers then mined a massive data bank of protein alleles, matching the prevalence of the 52 alleles in the study with 23 counties. Each country received a population-wide score, which combines the MHC-I binding capacity with MHC-I allele frequencies.

A compelling correlation was found between countries with lower mortality rates during the January-April, 2020 study period and high population-wide percentages of alleles identified by EnsembleMHC as strong binding molecules for SARS CoV-2 proteins.

Further, when only those alleles exhibiting high binding affinity for the S, N, M, and E proteins were compared, the association between low COVID-19 mortality and this suite of favorable MHC-I alleles was strongest, again suggesting that the virus's structural proteins are the most effective in producing an immune response.

The findings suggest that patients who have MHC-I alleles capable of engaging with SARS-CoV-2 structural protein peptides may stimulate an enhanced CD8+ T cell response, with improved post-infection outcomes and lower mortality.

The powerful technique described in the new study further unveils the subtle relationship of MHC-I alleles and immune response and will help researchers pinpoint the most important immunogenic viral fragments from SARS CoV-2, aiding future vaccine development. Combining such information with patient clinical data and genetic profiles may help identify those at greatest risk for this still-elusive disease.