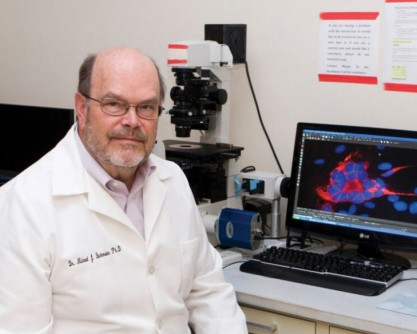 For more than 40 years, UCI infectious disease researcher Michael Buchmeier has studied coronaviruses, and he’s one of the leading experts on SARS-CoV-2, the version of the virus causing the COVID-19 pandemic. As a more lethal mutation of the virus, called the delta variant, sparks another wave of cases, he offers his expertise about this threat.

How does the delta variant differ from the original form of the COVID-19 coronavirus?

The form of the original coronavirus is really not clear. If, as we think, SARS-CoV-2 appeared in humans after jumping from an animal host, such as a bat, then the sequence may have already contained mutations in its genome that allowed that species jump. Many of the so-called emerging diseases represent jumps from a zoonotic animal host to humans.

The power of this genetic flexibility is characteristic of RNA viruses. This flexibility results in the production of a swarm of related viral “offspring” at each round of replication, allowing the virus to select a genetic makeup best adapted to a given host in the form of the variant viruses we’re now experiencing.

Mutations are always present in the progeny viruses and may be selected if there’s an advantage offered for replication in a new host species. The current variants of SARS-CoV-2 – which include the B.1.1.7 (alpha), B.1.351 (beta), B.1.617.2 (delta) and P.1 (gamma) variants circulating in the United States – are classified as variants of concern. Beta, delta and gamma are derived from the alpha virus, which was first described in the U.K. in 2020.

What makes the delta variant more contagious and virulent than the previous version?

Current research based on observation of patients infected with the delta variant shows that it may produce as much as 1,000 times more virus in the nasal passages and upper respiratory tract early in the infection, when people may not exhibit overt symptoms. This offers two advantages for viral spread: First, the spread of the virus in droplets from the upper respiratory tract is facilitated by the larger amount of infectious virus in the nasal secretions; and second, the immune response is not as robust in that location as it is in the lower respiratory tract. This combination leads to a high proportion of asymptomatic carriers who can spread the infection to others. Vaccination acts to protect these individuals from a severe reaction to the disease, which requires hospitalization and may result in death. Recent data indicates that less than 1 percent of newly hospitalized patients have been fully vaccinated.

Can vaccination effectively mitigate the spread of the delta variant?

Vaccines are not designed to prevent infection but to prevent disease. The evidence with the delta variant shows that vaccines are very effective at preventing severe disease and hospitalization.

The question I’m often asked is how the vaccines work. They “educate” the immune system with exposure to critical viral proteins made during the life cycle of the virus. In the case of SARS-CoV-2 and COVID-19, the protein spike that allows the virus to enter cells is the protein targeted by the introduction of a viral RNA message that directs the synthesis of the spike protein in the absence of virus replication. The result of this exposure is a robust immune response. In this way, the vaccination is able to “prime” the immune response to combat the virus with antibodies and T-cells at the time of infection without the normal delay. In this case, the vaccination is designed to quell any new infection, usually without symptoms. Each viral exposure serves to restimulate, or boost, the immune response protection it affords. The net result is to mitigate the spread of infection.

Do you see the COVID-19-causing coronavirus circulating like influenza each year?

It appears that the SARS-CoV-2 virus has been established as part of the human virome – which is the total collection of viruses in and on the human body – and will persist. The virus has spread rapidly among widely dispersed human populations. It has shown the ability to mutate to fine-tune and sustain the infectious cycle through several cycles of infection in humans and animals. Viral variants have arisen and will continue to appear, and some of these will be more capable of spreading. It’s possible that the virus may become less virulent for humans but, like the common cold coronaviruses, still persist. Finally, precursors of SARS-CoV-1 and SARS-CoV-2 exist in bats and may provide a reservoir for future cycles of human infection.

Research efforts will continue to provide the means to control this virus, as we have done for polio and smallpox, both of which were controlled in the 1950s and 1970s. The principal difference with SARS-CoV-2 is that the virus has an animal reservoir in the Asian horseshoe bat and is capable of reemergence. This is also the case with influenza, which persists in waterfowl and is amplified in swine. The genetics of influenza are dictated by the host, with mammalian strains being selected by passage through the pig. If it’s shown that the SARS-CoV-2 virus – like the flu virus – requires an intermediate host to make the jump from bat to human, then immunization of that host may be effective.

Are we facing a prolonged fourth wave of COVID-19 as we enter the fall?

Earlier in 2021, it appeared that the pandemic was on the verge of being controlled, but it was replaced by the fourth wave of COVID-19 cases that we’re now experiencing. The clear message is that as long as vaccination of populations remains incomplete and clearly effective social distancing and masking are not observed, we’re very likely to see more waves.