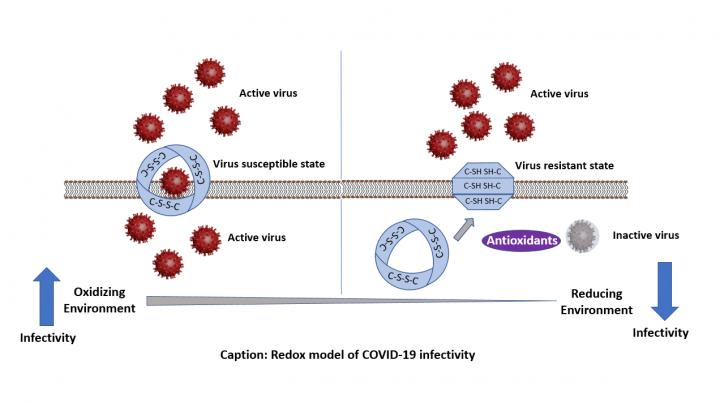 In analyzing the proteins and their amino acid building blocks, the researchers found that animals susceptible to the virus have a few things in common. They have two cysteine amino acids that form a special disulfide bond held together by an oxidizing cellular environment. This disulfide bond creates an anchor for the virus. Courtesy of Jaswinder Singh

What makes the elderly and people with underlying conditions more vulnerable to COVID-19? According to a new study led by McGill University researchers, clues can be found in the proteins involved in initiating infection, as the virus binds to host cells of different animals. Greater cellular oxidation with aging and sickness may explain why seniors and people with chronic illness get infected more often and more severely.

More than 60 million people have been infected and around 1.5 million have died from COVID-19. The virus is disrupting economies and food supply chains all over the world. Understanding why some animals get infected and others do not could be the key to unlocking new treatments and therapies. In a study published in Computational and Structural Biotechnology Journal, researchers analyzed available protein sequences of the virus and host cell receptors across different spices to find out why.

"We know that the virus can infect humans, cats, dogs and ferrets but not bovine and swine. Also, COVID-19 hits the elderly and people with underlying conditions more severely than the young and healthy ones. Until now reasons for this were unclear," says McGill professor Jaswinder Singh.

Once inside a host cell, the virus hijacks the cell's metabolic machinery to replicate and spread. The virus's protein spikes attach to a protein receptor on the surface of the host cell called ACE2, fusing the membranes around the cell and the virus together. This process allows the virus to enter the cell and co-opt its protein-making machinery to make new copies of itself. The copies then go on to infect other healthy cells.

In analyzing the proteins and their amino acid building blocks, the researchers found that animals susceptible to the virus have a few things in common. Such animals like humans, cats, and dogs have two cysteine amino acids that form a special disulfide bond held together by an oxidizing cellular environment. This disulfide bond creates an anchor for the virus. "Our analysis suggests that greater cellular oxidation in the elderly or those with underlying health conditions could predispose them to more vigorous infection, replication and disease," says co-author Rajinder Dhindsa, an emeritus professor of biology at McGill University.

In the case of animals resistant to the virus, like pigs and cows, one of these two cysteine amino acids is missing, and the disulfide bond cannot be formed. As a result, the virus cannot anchor on to the cell.

According to the researchers, preventing the anchor from forming could be the key to unlocking new treatments for COVID-19. One strategy, they suggest, could be to disrupt the oxidizing environment that keeps the disulfide bonds intact. "Antioxidants could decrease the severity of COVID-19 by interfering with entry of the virus into host cells and its survival afterwards in establishing further infection," says Singh.

In terms of next steps, the researchers say CRISPR technology could be used to edit protein sequences and test out their theory. The researchers are also looking into other proteins near the ACE2 receptor that may facilitate entry of the virus to see if they behave the same way.

2 Comments on "What Makes Certain Groups More Vulnerable to COVID-19?"