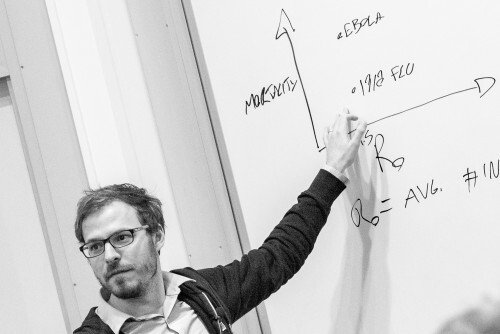 Interacting contagious diseases like influenza and pneumonia follow the same complex spreading patterns as social trends. This new finding, published in Nature Physics, could lead to better tracking and intervention when multiple diseases spread through a population at the same time.

"The interplay of diseases is the norm rather than the exception," says Laurent Hébert-Dufresne, a complexity scientist at the University of Vermont who co-led the new research. "And yet when we model them, it's almost always one disease in isolation."

When disease modelers map an epidemic like coronavirus, Ebola, or the flu, they traditionally treat them as isolated pathogens. Under these so-called "simple" dynamics, it's generally accepted that the forecasted size of the epidemic will be proportional to the rate of transmission.

But according to Hébert-Dufresne, professor of computer science at University of Vermont, and his co-authors, Samuel Scarpino at Northeastern University, and Jean-Gabriel Young at the University of Michigan, the presence of even one more contagion in the population can dramatically shift the dynamics from simple to complex. Once this shift occurs, microscopic changes in the transmission rate trigger macroscopic jumps in the expected epidemic size--a spreading pattern that social scientists have observed in the adoption of innovative technologies, slang, and other contagious social behaviors.

The researchers first began to compare biological contagions and social contagions in 2015 at the Santa Fe Institute, a transdisciplinary research center where Hébert-Dufresne was modeling how social trends propagate through reinforcement. The classic example of social reinforcement, according to Hébert-Dufresne, is "the phenomenon through which ten friends telling you to go see the new Star Wars movie is different from one friend telling you the same thing ten times."

Like multiple friends reinforcing a social behavior, the presence of multiple diseases makes an infection more contagious that it would be on its own. Biological diseases can reinforce each other through symptoms, as in the case of a sneezing virus that helps to spread a second infection like pneumonia. Or, one disease can weaken the host's immune system, making the population more susceptible to a second, third, or additional contagion.

When diseases reinforce each other, they rapidly accelerate through the population, then fizzle out as they run out of new hosts. According to the researchers' model, the same super-exponential pattern characterizes the spread of social trends, like viral videos, which are widely shared and then cease to be relevant after a critical mass of people have viewed them.

A second important finding is that the same complex patterns that arise for interacting diseases also arise when a biological contagion interacts with a social contagion, as in the example of a virus spreading in conjunction with an anti-vaccination campaign. The paper details a 2005 Dengue outbreak in Puerto Rico, and Hébert-Dufresne cites an additional example of a 2017 Dengue outbreak in Puerto Rico where failure to accurately account for the interplay of Dengue strains reduced the effectiveness of a Dengue vaccine. This in turn sparked an anti-vaccination movement--a social epidemic--that ultimately led to the resurgence of measles--a second biological epidemic. It's a classic example of real-world complexity, where unintended consequences emerge from many interacting phenomena.

Although it is fascinating to observe a universal spreading pattern across complex social and biological systems, Hébert-Dufresne notes that it also presents a unique challenge. "Looking at the data alone, we could observe this complex pattern and not know whether a deadly epidemic was being reinforced by a virus, or by a social phenomenon, or some combination."

"We hope this will open the door for more exciting models that capture the dynamics of multiple contagions," he says. "Our work shows that it is time for the disease modeling community to move beyond looking at contagions individually."

And the new study may shed light on the spread of coronavirus. "When making predictions, such as for the current coronavirus outbreak occurring in a flu season, it becomes important to know which cases have multiple infections and which patients are in the hospital with flu--but scared because of coronavirus," Hébert-Dufresne says. "The interactions can be biological or social in nature, but they all matter."

Be the first to comment on "When Coronavirus is Not Alone: Scientists Present ‘Meme’ Model for Multiple Diseases"