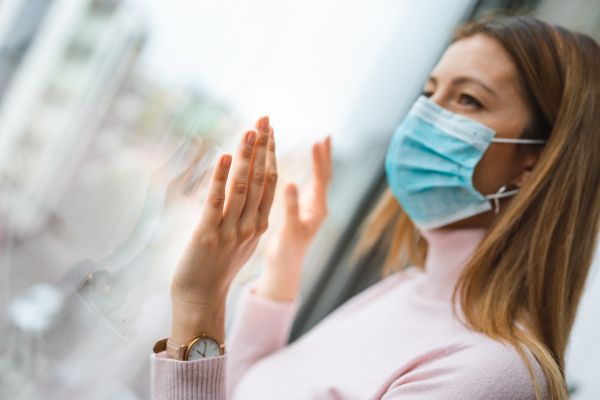 Women are more likely than are men to follow guidelines outlined by medical experts to prevent the spread of COVID-19, new research finds.

In an article published in Behavioral Science & Policy, New York University and Yale University researchers report that women have practiced preventive practices of physical distancing, mask wearing, and maintaining hygiene to a greater degree than men. Women were also more likely to listen to experts and exhibit alarm and anxiety in response to COVID-19.

The findings are consistent with pre-pandemic health-care behaviors, the study's authors note.

"Previous research before the pandemic shows that women had been visiting doctors more frequently in their daily lives and following their recommendations more so than men," explains Irmak Olcaysoy Okten, a postdoctoral researcher in NYU's Department of Psychology and the paper's lead author. "They also pay more attention to the health-related needs of others. So it's not surprising that these tendencies would translate into greater efforts on behalf of women to prevent the spread of the pandemic."

The study's authors, who also included Anton Gollwitzer, a researcher at Yale University, and Gabriele Oettingen, a professor in NYU's Department of Psychology, compared women and men in endorsing preventive health practices during the peak period of the pandemic in the U.S.

The researchers' conclusions are based on three studies that employed various methodologies: a survey, on-the-street observations in different sites, and a county-level analysis of movement through GPS data from approximately 15 million smart-phone coordinates.

In all their responses, women were more likely than were men to report following these practices; in all but one of these (in-person contact with others), the differences were statistically significant.

The survey also asked about which sources of information the respondents relied on for one particular behavior--social distancing. Notably, women were significantly more likely than men to rely on the following sources when deciding to what extent they distance themselves physically from others: medical experts, other countries' experiences, their governor, and social media.

In addition, women were much more likely then were men to attribute their behaviors to feeling anxious about the pandemic and their own health history as well as to feeling a responsibility to both themselves and to others.

In a second study, researchers observed a total of 300 pedestrians in three different U.S. locations by zip code (New York City/10012, New Haven, Conn./06511, and New Brunswick, NJ/08901) and tallied proper mask-wearing by covering the mouth and nose. They found a greater, and statistically significant, proportion of mask wearing among women (57.7 percent) than men (42.3 percent)--even though the gender distribution living in these zip codes was roughly equal.

To do this, they analyzed aggregated GPS location data from approximately 3,000 U.S. counties and 15 million GPS smart-phone coordinates between March 9 and May 29. These numbers were obtained from Unacast, a company that collects mobility data from adults who have provided their consent. The researchers also took into account the fact that social distancing policies were instituted around mid-March and loosened toward the middle and end of April; as a result, social distancing increased and then decreased over time across these counties.

The results showed that tracked individuals in counties with a higher percentage of males showed comparatively less social distancing as the COVID-19 pandemic progressed between March 9 and May 29, as measured both by movement and by visits to nonessential retailers. In this analysis, the researchers considered the tracked sample as representative of a county's overall gender break-down.

These differences remained even after accounting for COVID-19 cases per capita in these counties, the presence of stay-at-home orders, and other demographic characteristics of the counties, such as income, education, and profession.

The authors acknowledge that the findings could have been driven by men and women holding jobs that differ--specifically, men could be more likely to hold jobs in certain sectors deemed essential and therefore exhibit greater movement. However, taking into account counties' percentages of employment in various types of professions did not alter the differences in behavior between genders. Specifically, the results were unchanged when they controlled for counties' percentage of workers in a long list of job areas--agriculture, mining, utilities, construction, manufacturing, wholesale trade, retail trade, health care and social assistance, and hospitality and food services, among others.

"Fine-tuning health messages to alert men in particular to the critical role of maintaining social distancing, hygiene, and mask wearing may be an effective strategy in reducing the spread of the virus," says Okten.