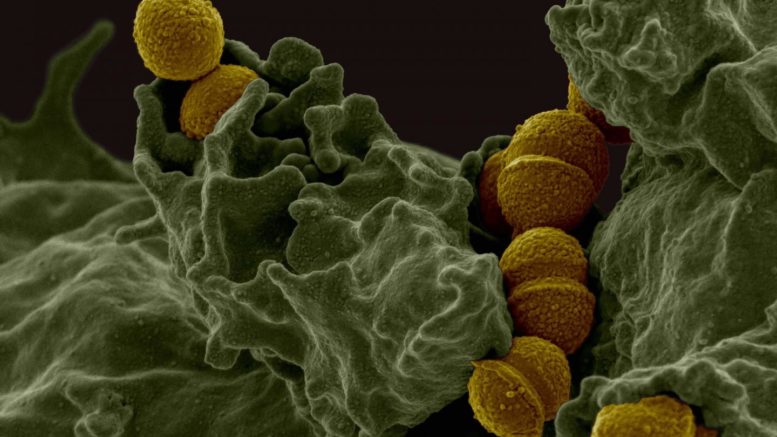 Researchers at Lund University in Sweden have discovered an antibody with the potential to protect against Strep A infection, as well as a rare form of antibody binding, that leads to an effective immune response against bacteria. The discovery could explain why so many Group A strep vaccines have failed.

The results are published in EMBO Molecular Medicine.

Group A streptococci have several ways in which they evade the body's immune system and, when they infect us, can cause both common throat infections (strep throat), scarlet fever, sepsis, swine pox and skin infections. So far, antibiotics work against these bacteria, but should they become resistant, they will pose a major public health threat.

One strategy that the scientific community uses to find new ways of fighting bacterial infections is to create target-seeking antibodies. First, the antibodies that the body's immune system produces in the event of an infection are mapped, and then their effect on the immune system is studied. In this way, antibodies can be identified that can be used both for preventive treatment and for treatment during an ongoing infection. However, it's a challenging process, and many attempts to develop antibody-based treatments against Strep A have failed.

The current study shows an unexpected way that antibodies interact with group A streptococci and, more specifically, how they hook onto the probably most important bacterial protein, the M protein, on the cell surface.

“We found that it happens in a way that has never been described before. Normally, an antibody binds via one of its two Y arms to its target protein at a single site, regardless of which of the two arms is used for binding. But what we have seen– and this is vital information – is that the two Y arms can recognize and hook on to two different places on the same target protein,” explains Pontus Nordenfelt, one of the authors behind the study.

This means that the two arms of the antibody – which are identical – can bind to two different sites on a target protein. It turns out that it is precisely this type of binding that is required for effective protection, and since it is probably rare, the researchers believe, it could explain why so many vaccine attempts have been unsuccessful. It could also be a reason why the bacteria manage to escape the immune system.

It has long been known that the streptococcal bacteria's M protein is of great importance for how disease occurs and develops in the body. Finding an antibody that attaches to this protein, thereby flagging it up to the immune system, can prevent the bacteria from infecting the body's cells. Since we know that the human body can fight the infection, such antibodies exist, but it is hard to locate them.

“This opens up possibilities where previous vaccine attempts have failed and means that the monoclonal antibody we used has the potential to protect against infection,” concludes Wael Bahnan, one of the authors behind the study.