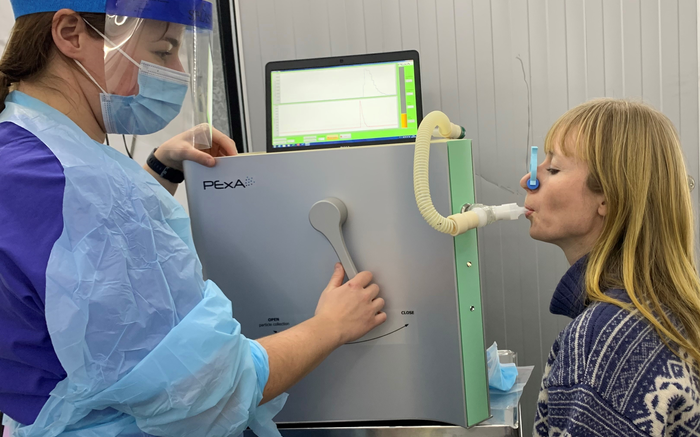 Traces of the SARS-CoV-2 virus detected in microscopically small fluid droplets exhaled with an instrument, developed by a research team at the University of Gothenburg. Courtesy of Agnes Viklund

Traces of the SARS-CoV-2 coronavirus that causes COVID-19 can be detected in microscopically small fluid droplets exhaled during a very short time span. This is the finding of a new study from the University of Gothenburg. The measurement was carried out primarily with an advanced research instrument developed by the publishing research team.

The findings have now been published in the journal Influenza and Other Respiratory Viruses. The measurements were made with the research instrument Particles in Exhaled Air (PExA), developed at Occupational and Environmental Medicine at Sahlgrenska Academy, and with a smaller handheld instrument called the Breath Explor (BE).

Infection spread with exhaled air is well known, but now the researchers show that a few breaths are sufficient for detecting traces of viruses in microscopically small fluid droplets (i.e. particles) exhaled from small airways, at least early in the course of COVID-19.

“We show that aerosol particles with the ribonucleic acid (RNA) virus can be found early in the course of COVID-19. The particles we can detect are very small–less than five micrometers in diameter–and we have here managed to capture particles with RNA virus in just a few breaths,” said Emilia Viklund, a doctoral student in occupational and environmental medicine and lead author of the study.

Of course, this immediately leads to conjecture about possibly replacing unpleasant nasal swab tests with convenient and easy breath tests. However, according to professor Anna-Carin Olin, the inventor of PExA, that would be extrapolating the findings too far.

“Respiratory viruses such as SARS-CoV-2 are likely to be concentrated mainly in the nose and throat, and it is easiest to take samples from that mucous membrane to detect the infection,” says Olin. “In contrast, the method of taking measurement in exhaled air is a very promising way of studying how the virus affects the small respiratory airways and how this effect changes during the course of the disease. Among other things, we are working on studies of post-COVID conditions using this method.”

Emilia Viklund says, “Methods for studying aerosol particles can be a good way of complementing established methods of measuring and monitoring COVID-19. In general, we can say that analysis of exhaled air has great potential for studying the spread of infection and where the virus is in the respiratory tract.”

The idea of trying to measure viruses and signs of changes in the small respiratory passages using PExA originated early in 2020, when the pandemic was an established fact. One challenge has been recruiting study subjects early in the course of the disease, despite close collaboration with the research team of the study’s co-author, professor Johan Westin, in the Department of Infectious Diseases.

In an initial small study involving only 10 subjects conducted in the autumn of 2020, only one of the samples was positive. The researchers believe this resulted from conducting measurements too late in the course of the disease. In collaboration with Sahlgrenska University Hospital, which allowed parallel measurement in connection with employees taking polymerase chain reaction (PCR) tests on the hospital grounds, the study eventually evolved to include more subjects in an earlier stage of the disease. These measurements were conducted in the spring of 2021 on medical professionals who had just submitted positive PCR samples for COVID-19.

The research shows unsurprisingly that coughing generated the most positive breath samples collected with PExA (8 of 25), followed by deep breathing (3 of 25) and regular breathing (2 of 25). Two positive aerosol samples from normal respiration were also generated when collected with the instrument Breath Explor, although these came from individuals who were separate from the PExA findings with normal respiration.

“The quantity of aerosol particles we needed for the test was about one 10-millionth of the amount from nasal swab samples needed to detect viral RNA in regular respiration with PCR analysis,” says Anna-Carin Olin. “The findings from the deep-breathing maneuver came as a surprise, the amount of sample is minute. Fluid droplets that one exhales after deep breathing form largely in the small airways, where it is known that the virus can cause great damage. As a result, it would be exciting to further study the findings in the exhaled air in relation to disease progression.”

The Alpha viral variant dominated when surveys were conducted, which caused infection that often extended farther down into the lungs compared with the now dominant Omicron variant. New studies underway will help explain how the complement system in small respiratory passages is activated, whether the response looks different when viruses change, and the long-term effects on small respiratory passages in the case of post-COVID syndrome.

Emilia Viklund is essentially a biomedical analyst, focusing on physiological investigations. The study now becomes part of her thesis, which she is scheduled to defend in early summer. The other contributing papers also involve measuring small particles with PExA and other methods of lung function measurements, but in that case in connection with smoking and asthma.