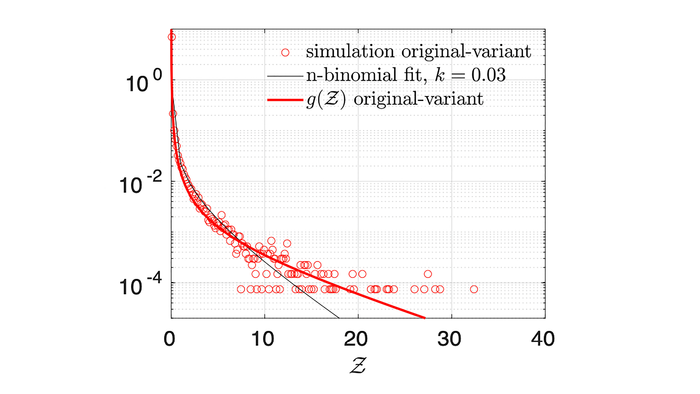 The probability density function, a measure of infection probability, and number of infections in each restaurant, demonstrate the group's ability to simulate and analyze which events pose a low probability of superspreading. Courtesy of Arnab Mukherjee and Swetaprovo Chaudhuri

Among several infectious disease terms to enter the public lexicon, superspreading events continue to make headlines years after the first cases of the COVID-19 pandemic. How features of the SARS-CoV2 virus lead to some events becoming superspreading events while leaving others relatively benign remains unresolved.

In a paper published in Physics of Fluids, researchers in Canada and the United States created a model to connect what biologists have learned about COVID-19 superspreading with how such events have occurred in the real world. They use real-world occupancy data from more than 100,000 places where people gather across 10 U.S. cities to test several features ranging from viral loads to the occupancy and ventilation of social contact settings.

The researchers' methods take aim at the curious observations that the variability between infection events is higher than one would expect, a situation called over-dispersion.

"It is now well known that COVID-19 is airborne, and that is probably the dominant pathway of transmission," said author Swetaprovo Chaudhuri. "This paper connects indoor airborne transmission to the evolution of the infection distribution on a population scale and shows the physics of airborne transmission is consistent with the mathematics of over-dispersion."

The group's model draws on numerical simulations and research by others on viral loads and the number of virus-laden aerosols ejected by people, as well as data on the occupancy of a restaurant or area from SafeGraph, a company that generates such data from anonymized cell phone signals.

"While there are uncertainties and unknowns, it appears it is rather hard to prevent a superspreading event if the person carrying high viral load happens to be in a crowded place," Chaudhuri said.

Chaudhuri said the findings not only underscore the importance of efforts to curb the spread of the virus but also help describe how integral properly planning can be for each situation.

"To mitigate such superspreading events, vaccination, ventilation, filtration, mask wearing, reduced occupancy – all are required," he said. "However, putting them in place is not enough, knowing what size, type, parameters can mitigate risk to certain acceptable levels is important."

The paper "Analysis of overdispersion in airborne transmission of Covid-19" is authored by Swetaprovo Chaudhuri, Prasad Kasibhatla, Arnab Mukherjee, William Pan, Glenn Morrison, Sharmistha Mishra, and Vijaya Kumar Murty. It can be accessed at https://aip.scitation.org/doi/full/10.1063/5.0089347