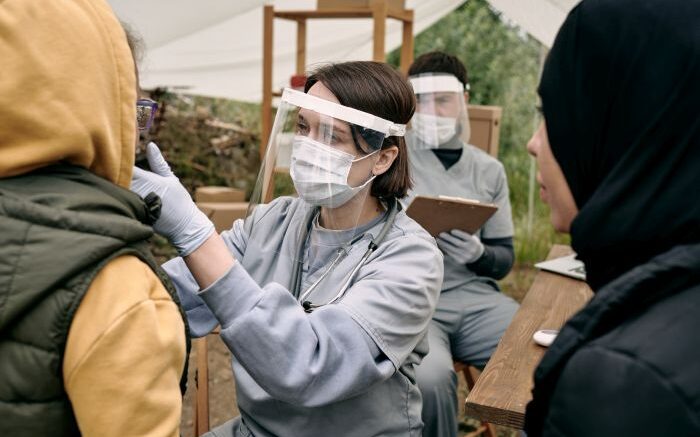 Annually, approximately 500,000 immigrants and tens of thousands of refugees (range: 12,000–85,000 during 2001–2020) move to the United States. While still abroad, immigrants, refugees, and others who apply for admission to live permanently in the United States must undergo a medical examination. This examination identifies persons with class A or B conditions. Applicants with class A conditions are inadmissible. Infectious conditions that cause an applicant to be inadmissible include infectious tuberculosis (TB) disease (class A TB), infectious syphilis, gonorrhea, and infectious Hansen’s disease. Applicants with class B conditions are admissible but might require treatment or follow-up. Class B TB includes persons who completed successful treatment overseas for TB disease (class B0), those with signs or symptoms suggestive of TB but whose overseas laboratory tests and clinical examinations ruled out current infectious TB disease (class B1), those with a diagnosis of latent TB infection (LTBI) (class B2), and the close contacts of persons known to have TB disease (class B3). Voluntary public health interventions might also be offered during the overseas examination. After arriving in the United States, a follow-up TB examination is recommended for persons with class B TB.

This report by Phares, et al. (2022) summarizes health information that was reported to CDC’s Electronic Disease Notification (EDN) system for refugees, immigrants, and eligible others who arrived in the United States during 2014–2019. Eligible others are persons who although not classified as refugees (e.g., certain parolees, special immigrant visa holders, and follow-to-join asylees) are eligible for the same services and benefits as refugees.

From 2014 through 2019, approximately 3.5 million persons moved to the United States from abroad, including 3.2 million immigrants, 313,890 refugees, and 95,993 eligible others. Among these, the overseas examination identified 139,683 persons (3,903 per 100,000 persons examined) with class B TB, 54 with primary or secondary syphilis (30 per 100,000 persons tested), 761 with latent syphilis (415 per 100,000 persons tested), and, after laboratory testing for gonorrhea was added in 2016, a total of 131 with gonorrhea (374 per 100,000 persons tested). Refugees were offered additional, voluntary interventions, including vaccinations and presumptive treatment for parasites. By 2019, first- and second-dose coverage with measles-containing vaccine were 96% and 80%, respectively. In refugee populations for whom presumptive treatment is recommended, up to 96% of refugees, depending on the specific regimen, were offered and accepted treatment. For the 139,683 persons identified overseas with class B TB, EDN sent arrival notifications and overseas medical data to the appropriate state or local health agency to facilitate post-arrival TB examinations. Among 101,119 persons identified overseas as having class B0 TB (6,586) or class B1 TB (94,533), a total of 67,432 (67%) had a complete post-arrival examination reported to EDN. Among 35,814 children aged 2–14 years identified overseas with class B2 TB, 20,758 (58%) had a complete post-arrival examination reported to EDN. (Adults are not routinely tested for immune reactivity to Mycobacterium tuberculosis during the overseas medical examination.)