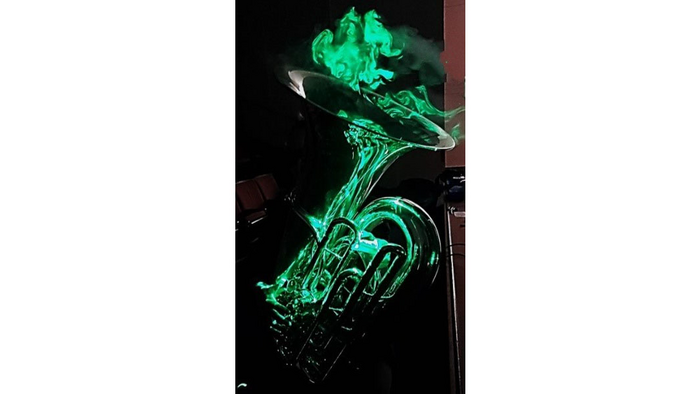 Visualization of flow emanating from a tuba using the laser sheet technique. The image shows a member of the Philadelphia Orchestra, Carol Jantsch, principal tuba player, who took part in the study on aerosol dispersion from musical wind instruments. Courtesy of Paulo E. Arratia

During the COVID-19 pandemic, many live musical events and festivals were postponed and even canceled to protect musicians and audience members. When they started performing again, many groups resorted to performing with remote or limited crowds. They also adapted their repertoire to promote pieces featuring strings and made significant changes in the number of musicians and their positions in the auditorium.

Orchestral ensembles have faced a particular challenge. Contamination is a chief concern: specifically, whether wind instruments are vectors of contamination through aerosol dispersion.

In a paper published by Physics of Fluids, researchers from the University of Pennsylvania worked with musicians from the Philadelphia Orchestra to deepen our understanding of how much aerosol is produced and dispersed by wind instruments.

"Ideally, musicians would sit near one another to compose the best sound, but such an arrangement became an issue during the COVID pandemic," said author Paulo Arratia, of the University of Pennsylvania.

The researchers used visualization to characterize the flow and then tracked fog particles in the air with a laser. They also measured aerosol concentration from wind instruments with a particle counter.

Then they combined these two measurements to develop a simple equation to describe aerosol dispersion, in which the aerosol speed decays with distance from the instrument. The idea is to help other researchers determine how far aerosols will travel by measuring the exit flow speed. This informs how fast the flow will decay.

"We were surprised that the amount of aerosol produced is of the same range as normal speech," said Arratia. "I was expecting much higher flow speeds and aerosol concentrations."

Flow measurements (using particle image velocimetry) showed that exit jet speeds are much lower than coughing and sneezing events. For most instruments, the maximum decay length is less than 2 meters from the instrument's opening. Consequently, wind musicians should stay 6 feet apart, similar to the recommendation for individuals.

The researchers will next look at contamination through aerosol dispersion from a group standpoint to understand how much aerosol and flow is produced by the whole orchestra playing together.

The paper, "Flow and aerosol dispersion from wind musical instruments." is authored by Quentin Brosseau, Ranjiangshang Ran, Ian Graham, Douglas J. Jerolmack, and Paulo E. Arratia. The article will appear in Physics of Fluids on Aug. 16, 2022 at https://doi.org/10.1063/5.0098273