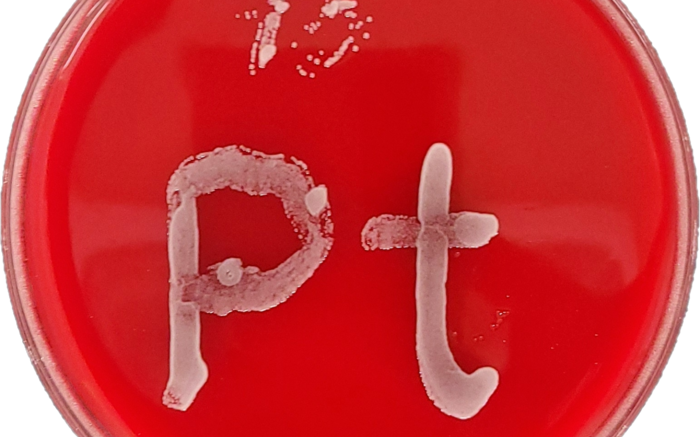 A Petri dish with red agar on which grows a fungal strand in the shape of the element symbol for platinum (Pt).

Each year, more than one billion people contract a fungal infection. Although they are harmless to most people, more than 1.5 million patients die each year as a result of infections of this kind. While more and more fungal strains are being detected that are resistant to one or more of the available drugs, the development of new drugs has come to a virtual standstill in recent years. Today, only around a dozen clinical trials are underway with new active agents for the treatment of fungal infections.

“In comparison with more than a thousand cancer drugs that are currently being tested on human subjects, this is an exceptionally small number,” explains Dr. Angelo Frei of the Department of Chemistry, Biochemistry and Pharmacy at the University of Bern, lead author of the study. The results have been published in the journal JACS Au.

To encourage the development of anti-fungal and antibacterial agents, researchers at the University of Queensland in Australia have founded the Community for Open Antimicrobial Drug Discovery (CO-ADD). The ambitious goal of the initiative is to find new antimicrobial active agents by offering chemists worldwide the opportunity to test any chemical compound against bacteria and fungi at no cost. As Frei explains, the initial focus of CO-ADD has been on “organic” molecules, which mainly consist of the elements of carbon, hydrogen, oxygen and nitrogen, and do not contain any metals.

However, Frei, who is trying to develop new metal-based antibiotics with his research group at the University of Bern, has found that over 1,000 of the more than 300,000 compounds tested by CO-ADD contained metals. “For most folks, when used in connection with the word ‘people’, the word metal triggers a feeling of unease. The opinion that metals are fundamentally harmful to us is widespread. However, this is only partially true. The decisive factor is which metal is used and in which form,” explains Frei, who is responsible for all the metal compounds in the CO-ADD database.

Metal compounds are not new to the world of medicine: Cisplatin, for example, which contains platinum, is one of the most widely used anti-cancer drugs. Despite this, there is a long way to go before new antimicrobial drugs that contain metals can be approved. “Our hope is that our work will improve the reputation of metals in medical applications and motivate other research groups to further explore this large but relatively unexplored field,” says Frei. “If we exploit the full potential of the periodic table, we may be able to prevent a future where we don’t have any effective antibiotics and active agents to prevent and treat fungal infections.”