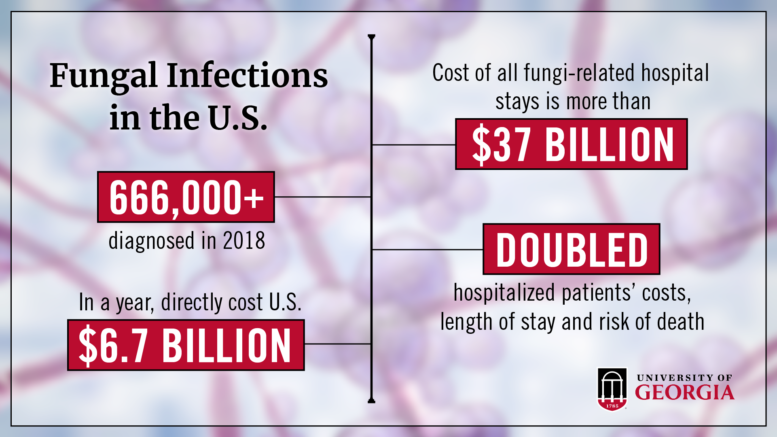 New research from the University of Georgia found that fungal infections account for $6.7 billion in healthcare spending in 2018. And that’s just the cases that were directly responsible for inpatient hospital stays.

Combined with secondary infections and diagnoses, the total cost of hospital stays associated with fungal infections was a whopping $37.7 billion, comprising 1.1% of total U.S. national health care expenses. It’s quite possible that fungi-related costs are even higher now, given the rise of secondary fungal infections in COVID-19 patients.

The study also found that fungal infections in hospitalized patients doubled hospital costs, doubled the length of a patient’s stay and doubled the patient’s risk of death.

“Fungal infections are much more than a yeast infection or athlete’s foot,” said Emily Rayens, corresponding author of the study and a postdoctoral fellow in the College of Veterinary Medicine. “These infections can have a very big impact on people’s lives and have a very high mortality rate.”

These infections are also becoming harder for healthcare providers to treat because of growing antimicrobial resistance.

Health care providers only have three classes of drugs to fight fungal infections in people. And several species of fungus are already resistant to one, if not more, of these medications.

“Fungi are currently beating us in the arms race to antifungal resistance,” said Rayens, who works in the laboratory of Karen Norris, a professor of infectious diseases and co-author of the paper. “Our primary focus is developing vaccines for fungal infections. It's a rush to try to prevent these infections from ever happening or to come up with alternative ways to treat them.”

Published by the Infectious Diseases Society of America, the study analyzed hospital discharge data from the most recent National Inpatient Sample, the largest publicly available record of hospitalizations and in-patient care in the U.S. There is no national surveillance system for fungal infections like the ones that track viral and bacterial diseases.

The researchers found more than 666,000 diagnoses of fungal infections in the dataset. The majority of infections were caused by one of three types of fungi: Aspergillus, a mold that usually affects the respiratory system when inhaled; Pneumocystis, which causes inflammation and fluid buildup in the lungs; and Candida, which can cause life-threatening bloodstream infections. Candida can also affect the skin or mucous membranes, causing conditions like thrush and vaginal yeast infections.

These infections are most commonly seen in people with immune disorders, including those with uncontrolled HIV, or impaired immunity from therapies like chemotherapy or anti-inflammatories.

But the study showed that even patients who were not classically “at risk” were also vulnerable to pathogenic fungi.

The first line of defense is typically treatment with azoles, broad-spectrum anti-fungal medications.

“Despite how effectively they work right now, azoles are usually the first anti-fungal that we see resistance to,” Rayens said. “As we move into other classes of anti-fungal drugs, we see that happening with them as well.

“Our data show that the number of fungal infections and the cost of treating those infections are going up,” Rayens said. “The currently available anti-fungal drugs are not doing a good enough job to reduce mortality due to fungal infections. To address this growing clinical problem, our laboratory is focused on developing a preventive anti-fungal vaccine that would target multiple fungal infections. We believe a vaccine-based preventive strategy for vulnerable patients would be of great benefit in terms of reducing disease burden, mortality and health care costs.”