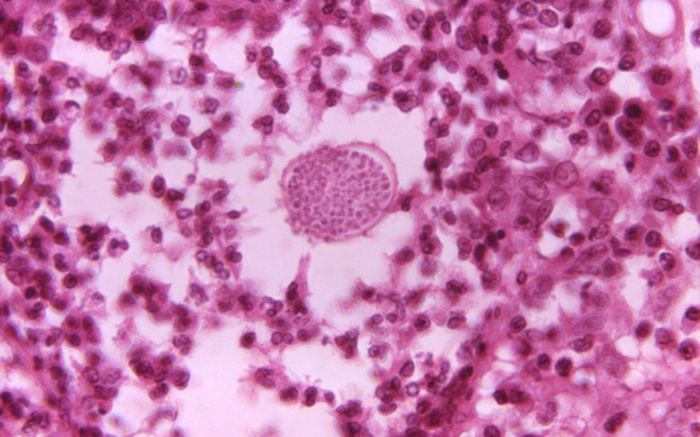 In this tissue sample from a patient with Valley Fever, a spherule of the fungus which causes the disease is clearly visible in the center of the picture. Courtesy of CDC

The National Institute of Allergy and Infectious Diseases (NIAID), part of the National Institutes of Health (NIH), has announced three awards to establish a network of Coccidioidomycosis Collaborative Research Centers to conduct research on coccidioidomycosis, also known as Valley Fever. These multi-disciplinary research teams will collaborate to investigate potential diagnostics, therapeutics, and vaccines for this fungal disease.

Valley Fever, caused by the fungus Coccidioides, is endemic in parts of the southwestern United States as well as in Mexico and Central and South America. Because the fungal spores live in soil, Valley Fever is of particular concern for people who work with soil or spend time in dusty conditions. Infection with Coccidioides is often asymptomatic, but some people suffer from flu-like symptoms, including fatigue, cough and shortness of breath, fever, and rashes. Each year, thousands of people in the United States experience severe cases, which can lead to long-term respiratory symptoms. In very rare cases, the infection can spread outside of the lungs and cause meningitis, skin lesions, and even death. Currently, there are no vaccines for Valley Fever, and treatment for those with or at risk for developing severe disease usually involves three to six months of antifungal medications.

The awards total more than $4.5 million in the first year, and are designed to support research that fills significant knowledge gaps about Valley Fever. For instance, researchers might seek to determine what factors in the host and in the pathogen contribute to the range in severity and outcomes of Valley Fever. Since few researchers currently study Valley Fever, the awards are intended to encourage scientists to focus more collaborative efforts on this disease by pooling their resources and expertise. By emphasizing collaboration and interdisciplinary research, these awards will support work that bridges both basic research and clinical research to facilitate new ways to prevent, diagnose, and treat Valley Fever.

Awards have been made to the following institutions: