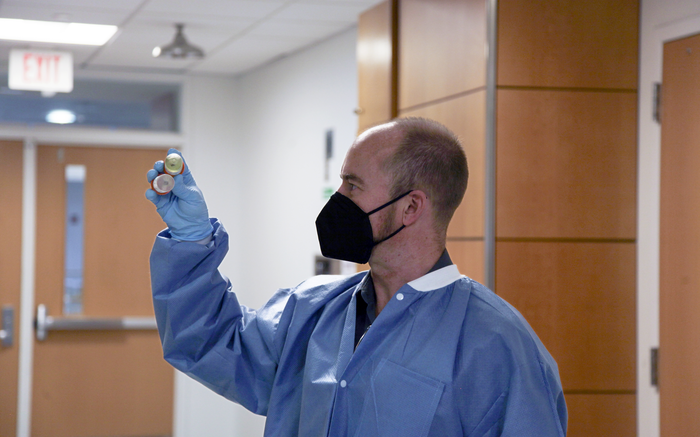 A multi-institutional team of researchers, including virologist Marc Johnson, a professor of molecular microbiology and immunology at the University of Missouri, has detected at least four “cryptic” variants of SARS-CoV-2, the virus that causes COVID-19, in samples of wastewater from New York City’s public sewer system. Their findings were recently published in Nature Communications.

According to the Centers for Disease Control and Prevention (CDC), viruses such as SARS-CoV-2 can continually evolve by acquiring mutations. Variants, such as delta or omicron, may contain one or more mutations within their viral sequence that help to distinguish themselves from other variants of SARS-CoV-2.

Johnson, a co-corresponding author on the study, believes the results suggest the “cryptic” mutations they identified in New York City could be linked to possible animal origins. While these origins have not been verified yet, he believes one possible source could be the rats that frequent New York City’s sewer system.

“For instance, we still don’t know where the omicron variant came from, but it had to come from somewhere,” Johnson said. “These variants are bubbling up everywhere, including omicron, which eventually spilled into the general population and wreaked havoc. We think these weird lineages could be where the next variant of concern for COVID-19 comes from.”

The idea for this project started in March 2020 after John Dennehy, a virologist and professor of biology at Queens College, City University of New York, began looking for different ways to analyze the impact of the COVID-19 pandemic. Monica Trujillo, an associate professor at Queensborough Community College, City University of New York, shared with Dennehy a study from Australia that described using wastewater to track the spread of a coronavirus, and it inspired Trujillo to ask officials from the New York City Department of Environmental Protection to send her wastewater samples in order to conduct similar work.

In the summer of 2020, Dennehy and Trujillo teamed up with Davida Smyth, the lead author on the study. Smyth, now an associate professor at Texas A&M University-San Antonio, was at The New School, New York at the time. They put together a team of researchers to begin tracking the spread of coronavirus via New York City’s wastewater. Since then, Dennehy, a co-corresponding author on the study, found some interesting results. When he shared some of the more unusual results during a March 2021 episode of Vincent Racaniello’s podcast “This Week in Virology,” a popular podcast with virologists nationwide, Johnson happened to be listening.

“The mutations that we were observing in our sample weren’t typical among any of the known sequences circulating at that time,” Dennehy said.

Ironically, Johnson was simultaneously reaching out to various researchers across the United States who were doing similar work with wastewater after he observed some unusual results from his analysis of wastewater in some of his samples from the greater St. Louis area. On the podcast, he heard Dennehy describe their targeted approach, which happened to be the same method MU was using to test samples of wastewater for SARS-CoV-2 in Missouri, but with one key difference — MU was analyzing a larger region of the virus genome for possible mutations. Within a week, Johnson had samples of NYC wastewater delivered to MU for further analysis.

“When we first started with the samples from New York City, I was looking to see if they had the same virus sequences that I saw in some of my samples from St. Louis,” Johnson said. “They were different, but all of them had similar mutations in common at one particular location on the virus — Q498. What’s amazing is that in most of the samples from New York City, the Q in Q498 had turned into a Y, or glutamine into tyrosine. If you look at the database, there was not, and continues to not be, a human patient who has had that mutation.”

Dennehy believes a possible explanation could be a biological process called convergent evolution.

“An animal in Missouri is not going to mix with the same type of animal in New York City,” Dennehy said. “Therefore, the evolution of the virus in each geographic area is independent of each other, but because it’s the same animal, the virus looks the same in both places. For instance, we think conditions in South Africa that gave rise to the omicron variant are the same conditions in New York City that gave rise to our cryptic variants. As a biologist, I thought the spread of delta was menacing, but the speed in which omicron took over New York City is on another level.”

Smyth joined the research team in part due to her passion for taking science from inside a laboratory to showing how it can be applied through a broader, real-world impact. A proud Irish immigrant, she transitioned from studying the basics of biology early in her career to now pursuing her passion by engaging her students in real-world health issues, such as antibiotic resistance, and tracking coronavirus in wastewater.

“I’m interested in how we can take what we know and apply it to the real world where it is needed the most,” said Smyth, who is also the deputy director for the National Center for Science and Civic Engagement. “Wastewater surveillance is really important in the context of community-based, public health measures where we have the ability to communicate health information at a level where decisions, practices and interventions can be implemented. Wastewater surveillance is fast, inexpensive and unbiased, and for that reason it has the ability to be implemented depending on resource availability in a variety of contexts, especially in areas with limited resources such as low testing and vaccine availability.”

“Tracking cryptic SARS-CoV-2 lineages detected in NYC wastewater,” was published in Nature Communications. Funding was provided in part by the New York City Department of Environmental Protection, a donation from the Linda Markeloff Charitable Fund, and a grant from the National Institutes of Health (U01DA053893-01).