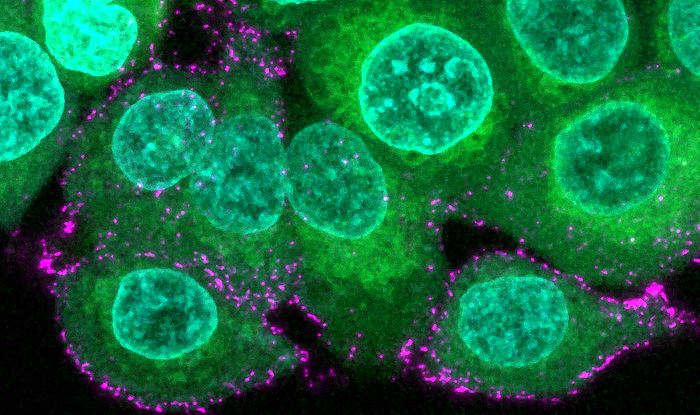 Human epithelial cells (green with blue nuclei) are incubated with synthetic Sars-CoV-2 virions (magenta) to study the initial of infection and immune evasion. Courtesy of MPI for Medical Research/Oskar Staufer

Scientists at the Max Planck Institute for Medical Research in Heidelberg and their collaborators at the Max Planck Bristol Center for Minimal Biology at the University of Bristol have developed a new approach to study Sars-CoV-2. For systematic and standardized research of Sars-CoV-2 they built minimalistic synthetic virus particles where they can incorporate distinct structures of the Sars-CoV-2 virus like the spike protein. This allowed scientists to study single molecular mechanisms in a controlled setting, which they can further manipulate and tune. Using this technique to study the spike protein, which has been shown to be critical for virus-host interaction and infection, they discovered a switching mechanism. Upon binding of inflammatory fatty acids, the spike protein changes its conformation, thereby becoming less “visible” to the hosts immune system.

The Sars-CoV-2 pandemic has been and is still one of the main global health concerns. Completely understanding Sars-CoV-2 pathogenesis and the molecular mechanisms behind the infection yields great opportunities to overcome the pandemic. Shedding light upon viral functions and host-virus interactions will facilitate the development of targeted therapies, vaccines or other preventive measures. However, research on Sars-CoV-2 in the laboratory environment comes with many challenges. One is the increased safety requirement for experiments, another is studying distinct mechanisms during the infection rather than the whole pathogenesis to better understand those single processes.

Researchers at the Max Planck Institute for Medical Research and their collaborators used their expertise in bottom-up synthetic biology to overcome some of those challenges. For their study, they developed artificial Sars-CoV-2 virions. The virions have a similar structure to natural viruses but do not contain any genetic information. Therefore, they can be used safely.

“Even more important for us, as we build these synthetic virions from scratch, is that we can precisely design their composition and structure. This allows us to perform a very systematic, step-by-step study on distinct mechanisms”, says Oskar Staufer, first author of the paper, former postdoc at the Max Planck Institute for Medical Research and current postdoc at the University of Oxford. He therefore sees great potential in using the synthetic virus-like particles in a multitude of analysis and characterization pipelines to study viruses beyond the current application for Sars-CoV-2.

It was known before, that the spike protein has a distinct region where inflammatory fatty acids can bind. However, the function of this binding pocket was previously not understood. Researchers at the Max Planck Institute for Medical Research and collaborators in Bristol now used the artificial Sars-CoV-2 virions to study this exact mechanism. They show that upon binding of a fatty acid, the spike protein changes its conformation and “folds”. As a result, binding to the ACE2 receptor of the host is no longer possible and fewer antibodies can bind to the protein.

Researchers can now start to understand why this cowering mechanism is used by the virus and determine whether this information can be used to develop therapeutic strategies.

“By “ducking down” of the spike protein upon binding of inflammatory fatty acids, the virus becomes less visible to the immune system. This could be a mechanism to avoid detection by the host and a strong immune response for a longer period of time and increase total infection efficiency," says Staufer.

However, scientists are just at the beginning of determining the function of the folding mechanism, but the use of artificial virions will allow for a systematic approach.

“Applying such synthetic biology concepts to a problem with global impact is truly exciting," says Staufer.

Within this joint research center of the Max Planck Society and the University of Bristol focused on the field of synthetic and minimal biology, scientists aim to construct artificial cells, cytoskeletons and develop nanoscale molecular machines to investigate the building blocks necessary for life. The close collaboration has led to many exciting findings in the past and yields great potential to complement each other’s skills to create scientific advances in the future.