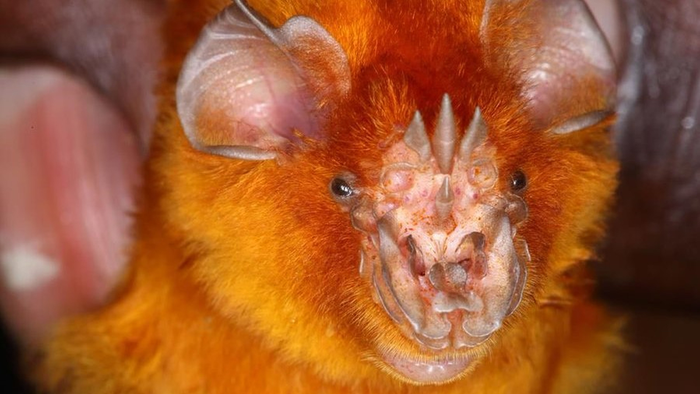 A photo of an African trident bat, one of the species that harbors a coronavirus with a peptide (protein fragment) similar to one found on the spike protein of SARS-CoV-2, the cause of COVID-19. Johns Hopkins Medicine researchers have shown that people vaccinated against COVID-19 might also produce an immune response to such peptides on a number of bat coronaviruses, considered to be a prime threat for future “jumps” of animal-to-human viral diseases. Courtesy of Paul Webala

A future vaccine providing protection against a wide range of coronaviruses that jump from their original animal hosts to humans — including SARS-CoV-2, the cause of COVID-19 — may be possible, say Johns Hopkins Medicine researchers, based on findings from their recent study.

In a paper posted online Jan. 21, 2022, in the Journal of Clinical Investigation, the research team focused on a peptide, or protein fragment, on the SARS-CoV-2 spike protein — the target of the two available messenger RNA (mRNA) vaccines for COVID-19 — called S815-827. Homologs (equivalent peptides) can be found on the spike proteins of MERS-CoV (the virus that causes Middle East Respiratory Syndrome, more commonly known as MERS, and believed to have been passed from camels to humans) and other animal coronaviruses. The researchers were particularly interested in studying the S815-827 homologs seen in coronaviruses hosted by bats because SARS-CoV-2 is believed to have risen from a bat species. Additionally, bat-borne coronaviruses are considered a major threat for producing future zoonotic (animal-to-human) diseases.

Previous research studies looking at a variety of human coronaviruses that cause the common cold have shown that homologs of the S815-827 peptide — also known as an epitope (a protein or portion of a protein that elicits an immune response) — are recognized by infection-fighting cells of the immune system called CD4+ T lymphocytes.

In the first part of their study, the Johns Hopkins Medicine researchers evaluated T cell response to the S815-827 epitope in 38 people who had received two doses of either the Moderna or Pfizer-BioNTech mRNA vaccines against SARS-CoV-2. They found that T cells specific to the peptide were produced by 16 (42%) of the study participants.

“This suggests that a significant portion of the vaccinated population might have T cells that produce an immune response to the epitope,” says study senior author Joel Blankson, MD, PhD, professor of medicine at the Johns Hopkins University School of Medicine. “Since this particular spike protein component is believed to have an important functional role in SARS-CoV-2 infections and is considered less likely to change because of mutations, it’s an appealing target for future vaccines — especially if it also can protect against animal coronaviruses that might migrate to humans.”

CD4+ T lymphocytes are immune system cells, also known as helper T cells, because they assist another type of immune cell, the B lymphocyte (B cell), in responding to surface proteins — antigens — on viruses such as SARS-CoV-2. Activated by the CD4+ T cells, immature B cells become either plasma cells that produce antibodies to mark infected cells for disposal from the body, or memory cells that “remember” the antigen’s biochemical structure for a faster response to future infections. Therefore, a CD4+ T cell response can serve as a measure of how well the immune system responds to a vaccine and yields humoral immunity.

The mRNA vaccines provide genetic instructions to a person’s immune system to recognize the SARS-CoV-2 spike protein and start production of antibodies against the virus.

Since S815-827 — a very stable component of the SARS-CoV-2 spike protein — potentially is a more specific target for future vaccines, the researchers wanted to see if the epitope-specific T cells (ones that recognize and respond to S815-827) they found in their vaccinated study participants would act the same with the homologous peptides found on other coronavirus spike proteins.

“Using the lymphocytes we obtained from our study participants, we were able to grow a line of T cells that would only recognize and respond to S815-827 and its homologs,” says Blankson. “We then used a variety of tests to see if those T cells also would recognize the epitopes on a number of bat coronaviruses — perceived as the greatest danger for producing another disease transmissible to humans.”

“We found that the T cells produced an immune response against the majority of the bat coronaviruses,” says Blankson. “This supports our hypothesis that the current mRNA vaccines elicit T cell responses that can cross-recognize bat coronaviruses, and thus might induce some protection against future zoonotic outbreaks.”

In another experiment, says Blankson, the team showed that the S815-827 homologs for MERS-CoV and a feline coronavirus also triggered epitope-specific CD4+ T cell activity. “This finding, combined with the main revelation that epitope homologs for many bat coronaviruses stimulate an immune response, means that we may one day be able to develop a multivalent vaccine that could protect against a broad spectrum of animal coronaviruses,” says Blankson.

Along with Blankson, the members of the study team from Johns Hopkins Medicine are lead author Beza Woldemeskel and co-authors Arbor Dykema, Caroline Garliss and Kellie Smith. Study co-author from Hunter College, City University of New York, is Saphira Cherfils.

Blankson, Dykema and Smith have filed for patent protection on subsets of the technologies described in the study. Smith receives commercial research funding from Bristol-Myers Squibb, AstraZeneca and Enara Bio, and has received travel support and honoraria from Illumina Inc.