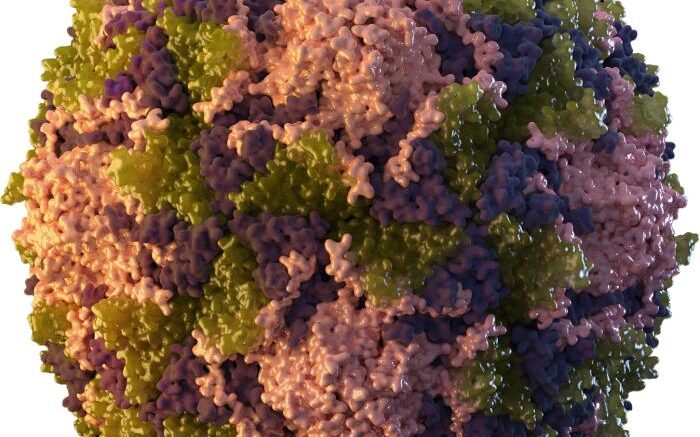 This illustration provides a three-dimensional graphical representation of a tightly packed, icosahedral, poliovirus particle that consists of 60-copies each of capsid polypeptides, designated as pink VP1 (viral protein1), green VP2, purple VP3, and though not shown here, VP4. This particle was composed of units of four capsid polypeptides, which interact in groups of five, resulting in a viral particle that has, what is referred to as five-fold (pentameric), and 12-fold symmetry. Courtesy of the CDC

In the early 20th century, polio virus struck fear in the hearts of many parents as wave after wave of infection paralyzed or even lead to the deaths of thousands of children each year. In 1955, following a University of Michigan-led clinical trial involving nearly 2 million children, Jonas Salk, Thomas Francis, Jr., and their colleagues announced the development of a safe and effective vaccine that would block the virus’ most devastating effects. Another effective polio virus vaccine developed by Albert Sabin would be announced a few years later.

Thanks to the protection provided by routine childhood vaccination, polio was considered eliminated in North and South America in 1994 and in Europe in 2002. However, a recent case of polio in an unvaccinated adult in New York—along with traces of poliovirus in the wastewater in and near the region in which this person lives--has many on high alert.

“If you have detected poliovirus in the wastewater, chances are that means there are probably multiple people who have been shedding, which is suggestive of circulation of poliovirus in that area,” said Adam Lauring, MD, PhD, an infectious disease specialist and a professor of microbiology and immunology and internal medicine.

A perfect storm of lower rates of vaccination, peculiarities of the Sabin vaccine, and bad luck appear to have come together to create the opportunity for polio to spread.

Lauring’s team has studied how the Sabin vaccine, which contains live but weakened poliovirus, can sometimes evolve to become capable of being spread and causing illness, including paralysis.

“Some people may ask, why do we still use this vaccine then? The answer is it’s an excellent vaccine,” he said.

For one, the Sabin vaccine can be administered orally, alleviating the need for needles. It doesn’t require refrigeration. And, says Lauring, it is thought to be much better at preventing transmission because it generates immunity inside the gut, the site of infection. (Poliovirus spreads through poor sanitation via oral exposure to feces.)

All of these reasons make it well-suited to use in places in the world where poliovirus is endemic.

The injectable Salk vaccine, the one most often used in developed nations, generates immunity in the blood and is not as good at preventing infection. However, most vaccinated people who are infected will never know or become ill.

As good as the oral Sabin vaccine is, things can go awry when vaccination isn’t widespread.

“Poliovirus can only evolve and become virulent if it’s finding enough people who are susceptible,” explained Lauring. “If vaccination rates are low, there will be more people susceptible, so you’ve kind of got this vicious circle. That’s been one of the big challenges in polio eradication.”

The main message is vaccination is vitally important and without it, viruses like polio could re-emerge. Most people who got their routine childhood vaccines are likely protected, said Lauring. Parents should make sure their kids are vaccinated.

“If people are delayed or not up to date, the best thing to do is get up to date on the polio vaccine.”