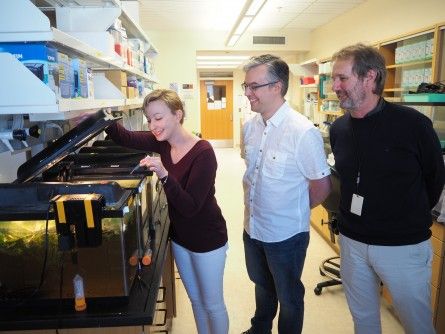 Texas Biomed staff scientists Winka Le Clec’h, Frédéric Chevalier and Professor Tim Anderson check on snails that are a vector for the parasites that cause schistosomiasis. The Anderson lab maintains the full, complex lifecycle of the schistosome parasites, which pass through several larval stages before infecting humans where they transform into adult worms. Courtesy of Texas Biomed

Independent teams from Texas Biomedical Research Institute and the Medical College of Wisconsin have published two papers in Science Translational Medicine identifying how the only approved drug to treat schistosomiasis, a widespread parasitic worm infection, works on the molecular level.

The insights lay the groundwork for diagnostic tests to help identify specific patients and regions with drug-resistant parasites, as well as for developing treatments that can overcome this challenge.

“We have two independent papers using completely different methods coming to the exact same conclusions,” says Texas Biomed professor Tim Anderson, PhD, senior author of one of the papers. “Because the papers are being published back-to-back, I think they will be taken very seriously.”

Schistosomiasis is a parasitic disease, caused by tiny flatworms called schistosomes. More than 200 million people across a large part of the globe are infected, and thousands die each year. Praziquantel is the only approved drug to treat schistosomiasis, and more than 250 million doses are distributed each year as part of an international campaign to try to eliminate the disease. However, about 30% of people are still infected after treatment.

“We have one drug to treat this huge population of parasites, and it works, but it is not perfect,” says Winka Le Clec’h, PhD, a staff scientist at Texas Biomed and first author. “We didn’t know how it was working, what is the precise mechanism of action. Now, for the first time we have a better idea about the target of praziquantel.”

The drug binds to a specific type of channel in the cell membrane, called a transient receptor potential (TRP) channel. When the channel is open, there is a massive influx of calcium ions into the cells, which results in worm paralysis and death.

Anderson’s team has spent the last five years determining that this channel is the main way the drug interacts with the worms. They use a combination of classic parasitology – by maintaining the full, complicated life cycle of schistosomes in their lab – and state-of-the-art molecular tools, genetic analyses, and bioinformatics.

Specifically, they identified hundreds of individual worms that showed resistance to the drug, versus those that were susceptible and died. Le Clec’h wanted an unbiased way to measure those that were alive after exposure to praziquantel, versus those that were indeed dead, and not just resting when visually observed. She measured lactate production, which indicates active respiration, and separated the worms into their two distinct groups.

By taking this approach they were able to more accurately quantify how much more resistant the worms that survived were: “They were over 377 times more resistant than the worms that died,” says Frédéric Chevalier, PhD, a staff scientist at Texas Biomed and co-first paper author. “For a long time, people believed resistance was only five-fold more. By sorting out the worms into pure populations, we were able to show resistance is a much more dramatic trait.”

To find a genetic driver behind this resistance, they ran a genome-wide association study to find if there were any sections of the worm’s genetic code that differed wildly between the two groups. The largest difference was in the gene that codes for the TRP channel.

“It was not just any TRP channel, it was the exact same TRP channel that our collaborator, Jonathan Marchant, identified using a completely different approach,” Le Clec’h says. “That was beautiful.”

Jonathan Marchant, PhD, a professor at the Medical School of Wisconsin had been investigating schistosome TRP channels in cells. His group’s paper, written with scientists from Merck KGaA, Darmstadt, Germany, the company involved in the discovery of praziquantel, clarifies how the drug physically binds to this particular TRP channel.

“Our work identified specific mutations in the TRP channel that can result in a loss of sensitivity to praziquantel. Together with the genetic analysis conducted at Texas Biomed we now have a clear idea how this important drug works – and what mutations may cause drug resistance,” Marchant says.

The two labs were working independently and only learned of each other’s investigations at a molecular parasitology conference in 2017. They quickly teamed up, realizing how their different approaches complimented and reinforced one another.

There is still much to learn to fully understand schistosomiasis drug resistance. The Texas Biomed team is working with collaborators in “hot spot” regions with a high rate of transmission and treatment failure, to see if the worms carry genetic variants in this TRP channel that confer resistance, or if there are other factors at play.

“This really sets the stage for large-scale screens of natural populations of schistosomes to see if we do have a problem with drug resistance,” Anderson says. “Research on TRP channels of mammals won the Nobel Prize for Physiology and Medicine in 2021. That these channels are also involved in mode of action of a critically important anti-parasitic drug is extremely exciting.”