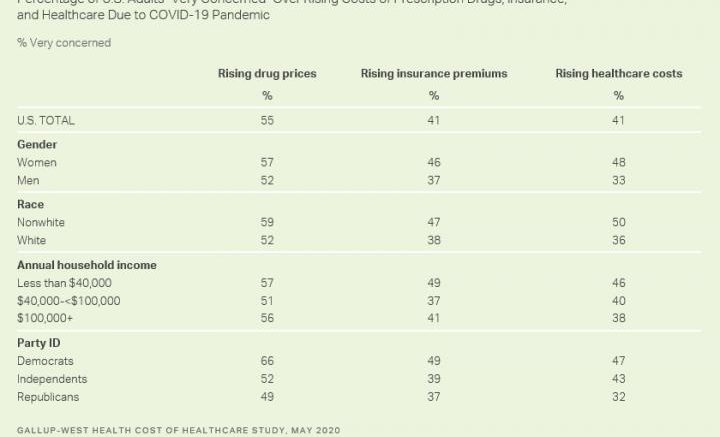 Percentage of US Adults "Very Concerned" Over Rising Costs of Prescription Drugs, Insurance, and Healthcare Due to COVID-19 Pandemic. Courtesy of Gallup-West Health Cost of Healthcare Study, May 2020

The new findings, released today by the nonprofit West Health and Gallup as part of ongoing research on the rising cost of healthcare in the U.S., come from a nationally representative survey of 1,016 U.S. adults. Amid a mounting death toll, the results underline the knife-edge fears associated with paying for care in the U.S.

Fears related to the cost impacts of the COVID-19 pandemic vary by demographic subgroup. Most Americans, regardless of gender, race, income or political identity, believe drug prices will rise. However, there is less consensus regarding rising insurance premiums and healthcare costs.

"Concerns loom large that when the pandemic is all over, Big Pharma and insurance companies will revert to old patterns and behaviors and continue to squeeze Americans with ever-higher drug prices and insurance premiums," said Tim Lash, chief strategy officer for West Health. "If history is any guide, these concerns are well-founded, which is why promises to rein in prices are not enough. We need to retool our healthcare system and enact smart legislation now."

Amid concerns about how the COVID-19 pandemic could raise healthcare costs, a large majority of Americans support the federal government directly negotiating the price of a treatment for the disease with the drug manufacturer. Eighty-eight percent of U.S. adults support this intervention, with very little daylight between Democrats (91%), independents (87%) and Republicans (89%).

As countries, including the U.S., continue to grapple with the effects of the pandemic and look ahead to a potential second wave of infections, Americans hold dim views of how their country has responded so far. Relative to how much the U.S. spends on healthcare, 9% of respondents rate the U.S. response as "excellent" and another 14% as "very good." In contrast, 34% rate the response as "poor" and 23% as "fair."

"Americans are clearly worried about the impact of the coronavirus pandemic well beyond being exposed to or spreading the disease," said Dan Witters, Gallup senior researcher. "Still, their misgivings regarding pharmaceutical companies and general anxieties regarding the cost of care are tempered by a clear, bipartisan call to policymakers to get involved to ensure that the public will be able to afford a treatment for COVID-19."

The new findings come from a nationally representative survey of 1,016 U.S. adults conducted between May 11 and May 22, 2020. Respondents represent all 50 U.S. states and the District of Columbia.