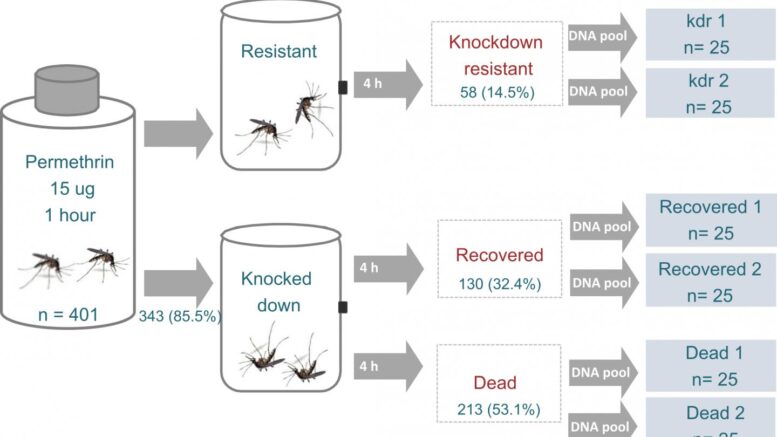 The Yellow fever mosquito (scientific name, Aedes aegypti) spreads multiple untreatable viruses in humans and is primarily controlled using a pesticide called permethrin. However, many mosquitoes are evolving resistance to the pesticide. A new study by Karla Saavedra-Rodriguez of Colorado State University and colleagues, published in the journal PLOS Genetics, identifies mutations linked to different permethrin resistance strategies, which threaten our ability to control disease outbreaks.

When treated mosquitoes encounter permethrin in the wild, they will do one of the following: immediately die, be knocked out but recover, or be unaffected. Saavedra-Rodriguez and her colleagues decided to investigate the genetic variations that lead to these three responses to the pesticide. The team collected mosquitoes from a permethrin-resistant colony in Tapachula, Mexico, exposed them to the pesticide in the lab and then sequenced the genomes from each group.

When they compared the genomes from the three types of mosquitos, they found that unaffected mosquitoes primarily had mutations in VGSC, a gene for a cellular sodium channel known to be involved in pesticide resistance. To a lesser extent, these mosquitoes also carried mutations in detoxification genes and cuticle protein genes. The cuticle makes up the insects' tough outer shell and can slow the pesticide as it enters the body. Insects that recovered from exposure had mutations in cuticle protein genes and in a different group of detoxification genes. The results show that there are distinct genetic changes behind these two types of permethrin resistance.

The results of the new study will help scientists to track mutations linked to resistance in populations of the Yellow fever mosquito from Southeastern Mexico. This knowledge can help scientists understand how mosquitoes have evolved resistance and when a population can no longer be controlled with permethrin. This understanding will be necessary to develop tools to support future insecticide management strategies.