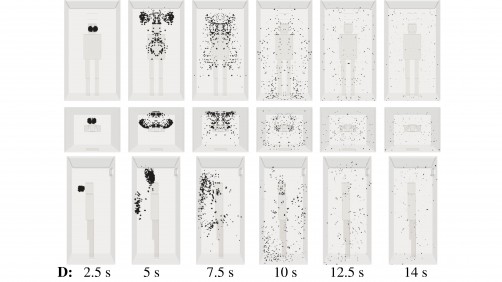 The positions of air inlets and outlets in confined spaces, such as elevators, greatly affect airborne virus transmission. In a study published in Physics of Fluids, researchers from University of Nicosia in Cyprus show while air purifiers would be expected to help, they may actually increase the spread.

Air quality in small spaces can quickly degrade without ventilation. However, adding ventilation will increase the rate at which air, possibly laden with viruses, can circulate in the small space. Elevator manufacturers have added air purifiers to take care of this problem, but the systems have not been designed to account for their effect on overall air circulation.

Air purifiers use ultraviolet radiation to kill viruses and other microbes, but they also circulate air, sucking it in and exhausting cleaned air. This adds to overall circulation, an aspect that has not been considered in previous research.

Previous work from the scientists indicated droplets of saliva can travel 18 feet in five seconds when an unmasked person coughs. The authors extended the same model to examine the effects of face masks and weather conditions.

Investigators carried out calculations for a 3D space equivalent to an elevator capable of holding five people. A mild cough was simulated at one position in the space, and air inlets and outlets were added in various locations to study their influence on circulation. An air purifier was also included in the simulation.

The investigators found the risk of airborne virus transmission is lowest for low ventilation rates.

“This is due to reduced flow mixing inside the elevator,” said author Talib Dbouk. “Regulatory authorities should thus define the minimum ventilation required depending on the type of building.”

“Our results show that installing an air purifier may increase the droplet spread,” Drikakis said. “The air intake integrated inside the purifier equipment induces flow circulation that can add to the transport of contaminated saliva droplets in the cabin.”

The observed effect increases with the number of infected persons in the elevator. Restricting the number of people allowed in an elevator would minimize the spread of the virus as would better design of air purifier and ventilation systems.

The article "On airborne virus transmission in elevators and confined spaces" is authored by Talib Dbouk and Dimitris Drikakis. The article will appear in Physics of Fluids on Jan 26, 2021 at https://aip.scitation.org/doi/10.1063/5.0038180.