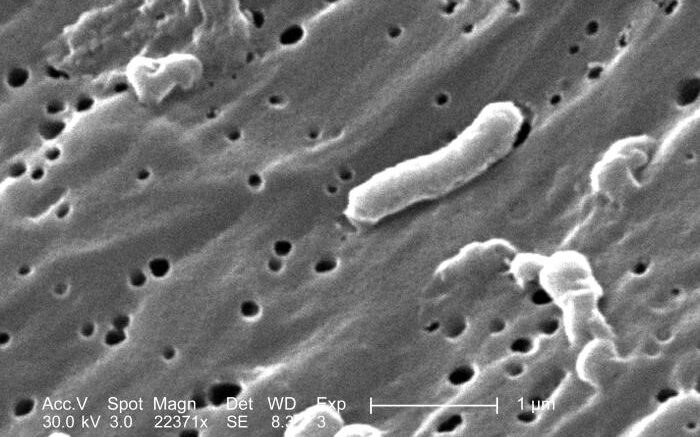 Under a high magnification of 22371X, this scanning electron microscopic (SEM) image depicted a Vibrio cholerae bacterium of the serogroup 01. Courtesy of CDC/Janice Haney Carr

A new study identifies a mechanism that makes bacteria tolerant to penicillin and related antibiotics, findings that could lead to new therapies that boost the effectiveness of these treatments.

Antibiotic tolerance is the ability of bacteria to survive exposure to antibiotics, in contrast to antibiotic resistance, when bacteria actually grow in the presence of antibiotics. Tolerant bacteria can lead to infections that persist after treatment and may develop into resistance over time.

The study in mice, “A Multifaceted Cellular Damage Repair and Prevention Pathway Promotes High Level Tolerance to Beta-lactam Antibiotics,” published Feb. 3 in the journal EMBO Reports, reveals how tolerance occurs, thanks to a system that mitigates iron toxicity in bacteria that have been exposed to penicillin.

“We’re hoping we can design a drug or develop antibiotic adjuvants that would then basically kill off these tolerant cells,” said senior author Tobias Dörr, assistant professor of microbiology in the Weill Institute for Cell and Molecular Biology in the College of Agriculture and Life Sciences.

Co-authors included Ilana Brito, the Mong Family Sesquicentennial Faculty Scholar and assistant professor in the Meinig School of Biomedical Engineering in the College of Engineering, and Lars Westblade, associate professor of pathology and laboratory medicine at Weill Cornell Medicine.

Some bacteria, including the model bacterium used in the study, Vibrio cholerae, which causes cholera in humans, are remarkably tolerant to penicillin and related antibiotics, known as beta lactam antibiotics. It has been known for a long time that beta-lactam antibiotics break down bacterial cell walls, but how bacteria survive loss of their cell walls was poorly understood.

In the study, the researchers developed a V. cholerae mutant that lacked a two-component damage repair response system that controls a gene network encoding diverse functions. Without the system, known as VxrAB, when the cell wall is damaged by antibiotics, the transfer of electrons across the cell membrane goes awry, leading to electrons ending up on the wrong molecules. This misdirection causes hydrogen peroxide to accumulate in the cell, which changes the oxidation state of cellular iron and disrupts signals for the cell to tell how much iron it has.

In the presence of hydrogen peroxide, the mutant bacteria cannot sense how much iron has been acquired, and it behaves as if it is iron-starved and seeks to acquire more iron. Left unchecked, these circumstances cause iron toxicity, which will kill the cell, according to the experiments the researchers conducted. In further tests with mutant V. cholerae bacteria, both in test tubes and in mice, the researchers showed that reducing the influx of iron increased the bacteria’s tolerance to beta lactams.

Fortunately for normal V. cholerae, exposure to antibiotics and the breakdown of the cell’s walls activate the VxrAB system, which works to repair cell walls and downregulates iron uptake systems, and thereby creates antibiotic tolerance. More study is needed to understand what triggers the VxrAB system in the presence of beta-lactam antibiotics.

The research opens the door for developing new drugs that could be combined with antibiotics to exploit oxidative damage and iron influx in tolerant bacteria. In future work, the researchers will search for parallel mechanisms of tolerance in other bacterial pathogens.