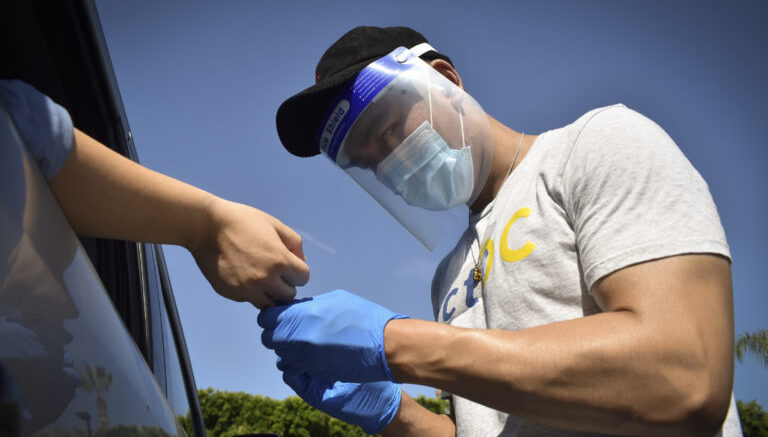 A medically trained UCI volunteer collects a blood sample from an actOC study participant at one of 11 drive-thru antibody testing sites in Orange County. Courtesy of Carlos Puma for UCI Health

Testing a representative sample of Orange County residents for a wide range of coronavirus antibodies, University of California, Irvine researchers found that 11.5 percent of them have antibodies for COVID-19, in contrast to previous estimates of less than 2 percent.

Latino and low-income residents had the highest prevalence of SARS-CoV-02 antibodies with rates of 17 percent and 15 percent, respectively.

UCI researchers led the actOC project in partnership with the OC Health Care Agency, which provided funding, testing sites and input on the study’s survey methods and scripts.

“This rigorously designed surveillance study offers important information about how many residents of Orange County have already been exposed to COVID-19,” said Bernadette Boden-Albala, director of UCI’s Program in Public Health and founding dean of the campus’s proposed School of Population Health. “Additionally, the study helps us to understand the impact of disparities.”

The results will enable leaders of the sixth-largest county in the U.S. to identify key demographics at higher risk of contracting – and having adverse outcomes from – the virus.

“The greater prevalence of a positive antibody response among Latinx populations is consistent with some of the testing and hospital data that has come out of Orange County and nationwide,” said Boden-Albala, a co-principal investigator on the study. “As we look toward the fall and flu season, this data also justifies enhanced planning and resources in communities likely to be hit hardest.”

“COVID-19 has had different impacts on different communities across our county. There has been particular concern for communities of color and residents with lower incomes that are disproportionately affected by this virus in terms of infection rates and poorer outcomes. Health equity continues to be paramount, and this study not only confirms the observable trend but also helps inform our strategies and policy recommendations moving forward to help ensure that all of our Orange County neighbors are able to attain access to testing, information and education, as well as the resources they need to care for themselves and their families,” said Dr. Clayton Chau, County Health Officer and director of the OC Health Care Agency.

Working with marketing firm LRW Group to recruit a truly representative sample of Orange County residents, the study enrolled nearly 3,000 random people via phone and email. The participants provided demographic information, revealed whether they had experienced any coronavirus symptoms, and were asked if they’d be willing to undergo blood screening for antibodies.

With a UCI-developed imaging platform, the researchers looked for antibody responses to a wide array of respiratory viruses – including SARS-CoV-2, which causes COVID-19. The highly sensitive technology allowed them to identify whether participants had contracted COVID-19 specifically, while many other antibody tests cannot accurately distinguish between it and other coronaviruses. The results were then analyzed and paired with the demographic data.

Researchers are following up every two weeks for four months with a subset of 200 people who tested positive so that they can see how the immune response changes over time.

UCI researchers initiated the study because they had a hunch that the prevalence of COVID-19 had been underestimated, since individuals with few to no symptoms were rarely tested.

“There was this lurking suspicion that there’s a large fraction of people who have had it that did not know,” said co-principal investigator Tim Bruckner, associate professor of public health. “Either they had symptoms and did not seek care, or they did not have symptoms and had no reason to go.”

Recent surveys in other metropolitan regions of the U.S. suggest that infection rates are higher and death rates lower than previously thought and that rates vary significantly from place to place. The results of the actOC project confirm that nearly seven times as many county residents have contracted COVID-19 as had been believed.

It is not yet clear what levels of antibodies indicate near- or long-term immunity for people who have had COVID-19, but continued follow-up with those who tested positive will provide further data over time. Although 11.5 percent is still substantially below the minimum of 70 percent of residents who would need to have antibodies in order to achieve herd immunity – and given that one county cannot act as a guide for the country as a whole – many researchers hope that representative antibody testing across the U.S. could help guide reopening and public health decisions.

“Our study demonstrates that while a significant number of O.C. residents were already exposed and developed antibodies to COVID-19, much of the county still remains vulnerable to the virus,” Boden-Albala said. “For researchers, there is a lot more work to be done, such as understanding the protection of COVID antibodies and identifying and addressing notable disparities associated with this virus.”