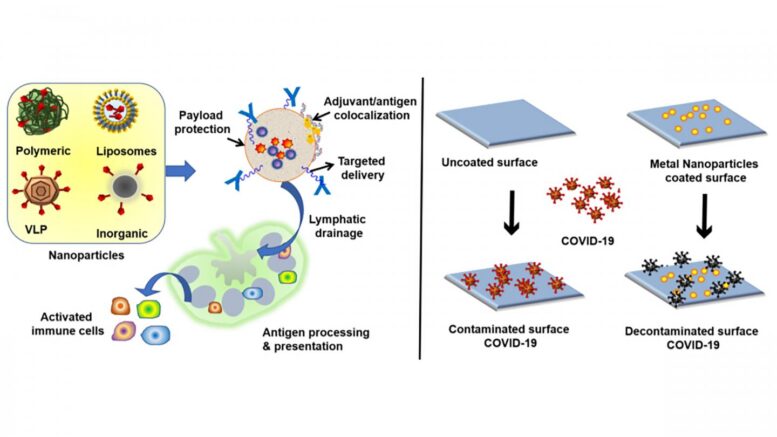 Researchers are studying the ways biomaterials can be used both to strengthen vaccines to fight viruses in the body and to build surfaces that would fight virus cells that landed on them. Courtesy of Sushma Kumari

Advances in the fields of biomaterials and nanotechnology could lead to big breakthroughs in the fight against dangerous viruses like the novel coronavirus that causes COVID-19.

In APL Bioengineering, researchers from the Indian Institute of Science describe two possibilities being explored by scientists in the field to make vaccines more effective and build surfaces that could fight and kill viruses on their own.

"It is important not just in terms of COVID," said author Kaushik Chatterjee. "We've seen SARS, and MERS, and Ebola, and a lot of other viral infections that have come and gone. COVID has, of course, taken a different turn altogether. Here, we wanted to see how biomaterials could be useful."

Biomaterials are materials engineered to interact with other biological systems in some way. Examples include joint replacements, dental implants, surgical mesh, and drug delivery systems.

Nanotechnology, meanwhile, focuses on building tiny structures and devices at the microscopic level. It has been used in the medical field to target specific cells or tissues.

It is the combination of the two that could lead to more effective vaccines against viruses. While some current vaccines are already effective, the authors said biomaterials-based nanoparticles could one day be used to make them even stronger.

"It is a means of stimulating the immune cells which produce antibodies during the vaccination," said author Sushma Kumari. "It is like a helper, like priming the cells. Now, the moment they see the protein, the cells are more responsive to it and would be secreting more antibodies."

At the same time, researchers are studying ways the technology could be used to curb the spread of viruses in the world around us. Currently, the techniques used to disinfect surfaces in public places, from conventional cleaning to aerosols to ultraviolet light, can require lots of time and effort.

Emerging bioengineering technologies would create antiviral surfaces that could disinfect themselves.

"As viruses end up as droplets on various surfaces, the next person touching that could be picking up the disease," Chatterjee said.

By putting a natural charge on the surface or designing it at the nano-level in an unfriendly pattern for the virus, masks, PPE suits, hospital beds, doorknobs, and other items could be created that automatically damage or destroy a virus.

The authors note this research is in its infancy. Much work remains to be done to learn which of many biomaterials may be most effective at fighting viruses, and an answer for one disease likely will not be the same for others.

"Hopefully, this review and this kind of discussion will get researchers to think about how to use the knowledge that's out there," said Chatterjee.

The article "Biomaterials-based formulations and surfaces to combat viral infectious diseases" is authored by Kaushik Chatterjee and Sushma Kumari. The article will appear in APL Bioengineering on Feb. 9, 2021 at https://aip.scitation.org/doi/10.1063/5.0029486.