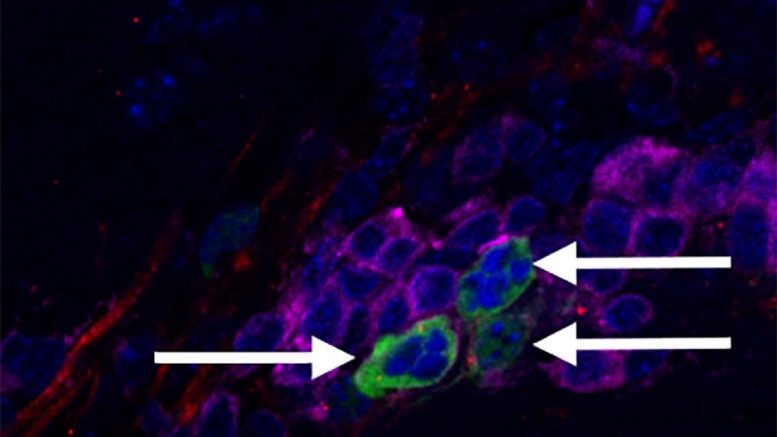 Researchers have found that astrocytes, a type of brain cell can harbor HIV and then spread the virus to immune cells that traffic out of the brain and into other organs. HIV moved from the brain via this route even when the virus was suppressed by combination antiretroviral therapy (cART), a standard treatment for HIV. The study, conducted by researchers at Rush University Medical Center in Chicago and published in PLOS Pathogens, was funded by the National Institutes of Health.

“This study demonstrates the critical role of the brain as a reservoir of HIV that is capable of re-infecting the peripheral organs with the virus,” said Jeymohan Joseph, PhD, chief of the HIV Neuropathogenesis, Genetics, and Therapeutics Branch at NIH’s National Institute of Mental Health, which co-funded the study. “The findings suggest that in order to eradicate HIV from the body, cure strategies must address the role of the central nervous system.”

HIV attacks the immune system by infecting CD4 positive (CD4+) T cells, a type of white blood cell that is vital to fighting off infection. Without treatment, HIV can destroy CD4+ T cells, reducing the body’s ability to mount an immune response — eventually resulting in AIDS.

cART, which effectively suppresses HIV infections, has helped many people with HIV live longer, healthier lives. But some studies have shown that many patients receiving antiretroviral drugs also show signs of HIV-associated neurocognitive disorders, such as thinking and memory problems. Researchers know that HIV enters the brain within eight days of infection, but less is known about whether HIV-infected brain cells can release virus that can migrate from the brain back into the body to infect other tissues.

The brain contains billions of astrocytes, which perform a variety of tasks—from supporting communication between brain cells to maintaining the blood-brain barrier. To understand whether HIV can move from the brain to peripheral organs, Lena Al-Harthi, PhD, and her research team at Rush University Medical Center transplanted HIV-infected or non-infected human astrocytes into the brains of immunodeficient mice.

The researchers found that the transplanted HIV-infected astrocytes were able to spread the virus to CD4+ T cells in the brain. These CD4+ T cells then migrated out of the brain and into the rest of the body, spreading the infection to peripheral organs such as the spleen and lymph nodes. They also found that HIV egress from the brain occurred, albeit at lower levels, when animals were given cART. When cART treatment was interrupted, HIV DNA/RNA became detectable in the spleen — indicating a rebound of the viral infection.

“Our study demonstrates that HIV in the brain is not trapped in the brain — it can and does move back into peripheral organs through leukocyte trafficking,” said  Al-Harthi. “It also shed light on the role of astrocytes in supporting HIV replication in the brain — even under cART therapy.”

This information has significant implications for HIV cure strategies, as such strategies need to be able to effectively target and eliminate reservoirs of HIV replication and reinfection, Al-Harthi added.

“HIV remains a major global public health concern, affecting 30 million to 40 million people across the globe. To help patients, we need to fully understand how HIV affects the brain and other tissue-based reservoirs,” said May Wong, Ph.D., program director for the NeuroAIDS and Infectious Diseases in the Neuroenvironment at the NIH’s National Institute of Neurological Disorders and Stroke, which co-funded the study. “Though additional studies that replicate these findings are needed, this study brings us another step closer towards that understanding.”