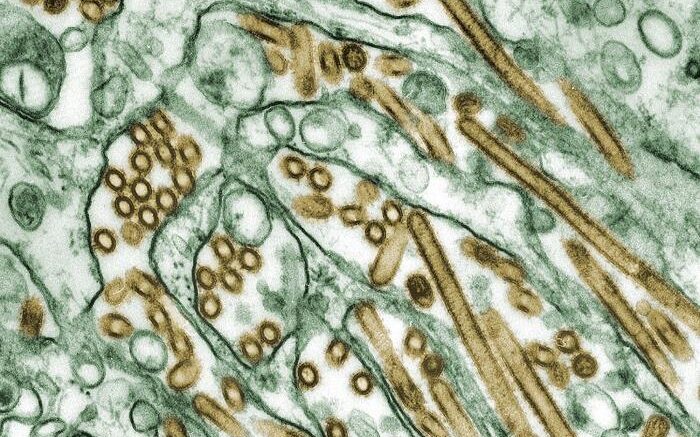 A person has tested positive for avian influenza A(H5) virus (H5 bird flu) in the U.S., as confirmed by the Centers for Disease Control and Prevention (CDC) and reported by the Colorado Department of Public Health and Environment on April 28, 2022. This case occurred in a person who had direct exposure to poultry and who was involved in the culling (depopulating) of poultry with presumptive H5N1 bird flu.

Starting in January, the U.S. Department of Agriculture’s (USDA) Animal and Plant Health Inspection Service (APHIS) detected highly pathogenic avian influenza (HPAI) A(H5N1) virus in wild birds in the United States followed by multiple detections in U.S. commercial poultry and backyard bird flocks [1,2]. Detection of A(H5) virus in one person who was involved in culling of poultry does not change the human health risk assessment, which remains low for the general public. People with work or recreational exposures to infected birds are at greater risk of infection and should follow recommended precautions. The purpose of this HAN Health Advisory is to notify public health workers, clinicians, and the public of the potential for human infection with this virus and to describe the CDC’s recommendations for patient investigation and testing, infection control including the use of personal protective equipment, and antiviral treatment and prophylaxis.

On April 20, 2022, an adult in Colorado developed fatigue following exposure to presumptive H5N1 virus-infected poultry while participating in poultry depopulation activities during April 18-22, 2022. The individual, who does not have any known chronic medical conditions, reported wearing recommended personal protective equipment although compliance with recommended eye protection was unclear. An upper respiratory tract specimen was collected from the individual on April 20, 2022. The specimen arrived at and was tested at the Colorado Department of Public Health and Environment Laboratory Services on April 25, 2022; reverse transcription-polymerase chain reaction (RT-PCR) analysis indicated it was positive for influenza A virus but negative for contemporary seasonal human H1pdm09 and H3 influenza A virus subtypes. The specimen was forwarded to the Influenza Division of the Centers for Disease Control and Prevention (CDC) for further testing, was received at CDC on April 27, 2022, and confirmed as influenza A(H5) virus using RT-PCR the same day. The A(H5)-positive individual did not report any other symptoms and their fatigue resolved after 3 days; the individual returned to their baseline health. The individual remains asymptomatic in isolation on oseltamivir treatment. A second respiratory specimen from the same patient was collected on April 26, 2022, and tested negative for influenza viruses on April 27, 2022, by the Colorado Department of Public Health and Environment Laboratory Services. Whether the detection of H5 virus in the original respiratory specimen is a result of transient surface contamination of the individual’s nasal passages or represents infection, cannot be determined at this point. Public Health Authorities are pursuing the appropriate public health response and are assuming this is an infection and taking actions to contain and treat. Specimens from close contacts of the A(H5)-positive individual and persons who participated in depopulation activities at the same facility were collected on April 20, 2022, and tested negative for influenza viruses. These individuals are being monitored for symptoms and additional respiratory specimens are being obtained and re-tested for influenza viruses. All individuals who were exposed to poultry at this facility are being monitored for symptoms for 10 days and will be tested if symptomatic in accordance with CDC and USDA guidance.

Influenza A viruses infect the respiratory and gastrointestinal tracts of birds causing birds to shed the virus in their saliva, mucous, and feces. Human infections with avian influenza A viruses can happen when enough virus gets into a person’s eyes, nose, or mouth or is inhaled. People with close or prolonged unprotected contact with infected birds or contaminated environments are at greater risk of infection. Illnesses in humans from avian influenza A virus infections have ranged from mild (e.g., eye infection, upper respiratory symptoms) to severe illness (e.g., pneumonia) resulting in death. The spread of avian influenza A viruses from one infected person to another has been reported in other countries, but is very rare, and when it has happened, it has not led to sustained spread among people.

At this time, CDC considers the human health risk to the U.S. public from these newly identified HPAI A(H5N1) viruses to be low; however, people with close or prolonged, unprotected contact with infected birds or contaminated environments are at greater risk of infection. While there is little information about the spectrum of illness that could result from human infections with current H5N1 bird flu viruses, currently, CDC considers this virus as having the potential to cause severe disease in humans and recommends the following:

Recommendations for Clinicians
Clinicians should consider the possibility of HPAI A(H5N1) virus infection in persons showing signs or symptoms of respiratory illness who have relevant exposure history. This includes persons who have had contact with potentially infected birds (e.g., handling, slaughtering, defeathering, butchering, culling, preparation for consumption); direct contact with water or surfaces contaminated with feces or parts (carcasses, internal organs, etc.) of potentially infected birds; and persons who have had prolonged exposure to potentially infected birds in a confined space. Clinicians should contact the state public health department to arrange testing for influenza A(H5N1) virus, collect respiratory specimens using personal protective equipment (PPE), consider starting empiric antiviral treatment, and encourage the patient to isolate at home away from their household members and not go to work or school until it is determined they do not have avian influenza A virus infection. Testing for other potential causes of acute respiratory illness should also be considered depending upon the local epidemiology of circulating respiratory viruses, including SARS-CoV-2.