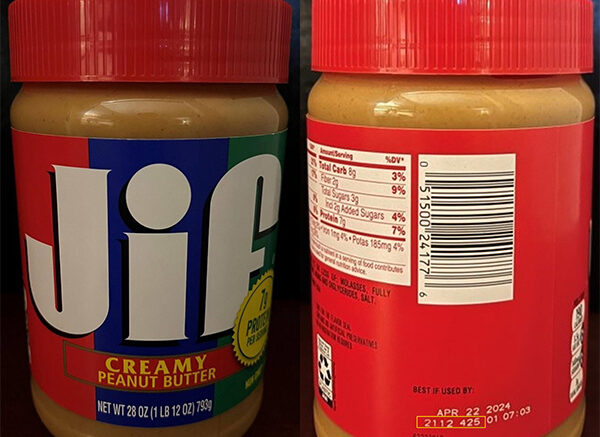 The Centers for Disease Control and Prevention (CDC), public health and regulatory officials in several states, and the U.S. Food and Drug Administration (FDA) are collecting different types of data to investigate a multistate outbreak of Salmonella Senftenberg infections.

Epidemiologic and laboratory data show that some Jif brand peanut butters may be contaminated with Salmonella Senftenberg and are making people sick.

As of May 21 2022, a total of 14 people infected with the outbreak strain of Salmonella Senftenberg have been reported from 12 states. Illnesses started on dates ranging from February 17, 2022, through May 1, 2022.

Sick people range in age from less than one to 85 years, with a median age of 56, and 71% are female. Of six people with information available, two have been hospitalized. No deaths have been reported.

The true number of sick people in an outbreak is likely much higher than the number reported, and the outbreak may not be limited to the states with known illnesses. This is because many people recover without medical care and are not tested for Salmonella. In addition, recent illnesses may not yet be reported as it usually takes two to four weeks to determine if a sick person is part of an outbreak.

Public health investigators are using the PulseNet system to identify illnesses that may be part of this outbreak. CDC PulseNet manages a national database of DNA fingerprints of bacteria that cause foodborne illnesses. DNA fingerprinting is performed on bacteria using a method called whole genome sequencing (WGS). WGS showed that bacteria from sick people’s samples are closely related genetically. This suggests that people in this outbreak got sick from the same food.

WGS analysis shows that samples from sick people in this investigation are closely related genetically to a sample collected in 2010 from the environment at J.M. Smucker Company’s facility in Lexington, KY, where some Jif brand peanut butter is produced.