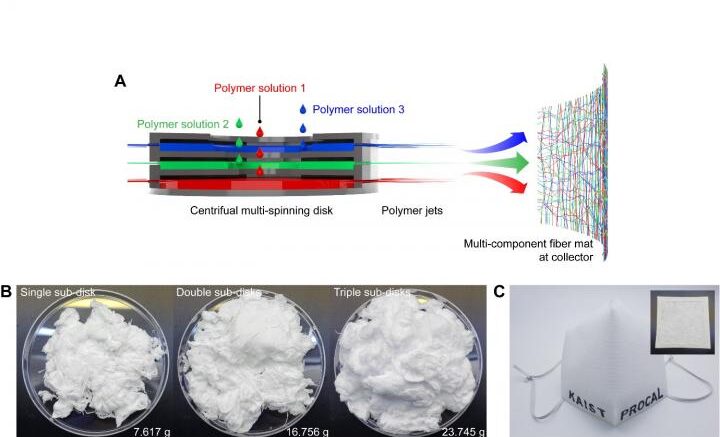 Figure (A) Schematic illustration of the centrifugal multispinning polymer nanofiber production process. (B) The polymer nanofibers spun by the system. The increase of the number of sub-disk shows the proportional enhancement of the productivity. (C) Face masks and mask filters fabricated using mass-produced nanofibers (inset). Courtesy of Do Hyun Kim, KAIST

Korea Advanced Institute of Science and Technology (KAIST) researchers have developed a novel nanofiber production technique called 'centrifugal multispinning' that will open the door for the safe and cost-effective mass production of high-performance polymer nanofibers. This new technique, which has shown up to a 300 times higher nanofiber production rate per hour than that of the conventional electrospinning method, has many potential applications including the development of face mask filters for coronavirus protection.

Nanofibers make good face mask filters because their mechanical interactions with aerosol particles give them a greater ability to capture more than 90% of harmful particles such as fine dust and virus-containing droplets.

The impact of the COVID-19 pandemic has further accelerated the growing demand in recent years for a better kind of face mask. A polymer nanofiber-based mask filter that can more effectively block harmful particles has also been in higher demand as the pandemic continues.

'Electrospinning' has been a common process used to prepare fine and uniform polymer nanofibers, but in terms of safety, cost-effectiveness, and mass production, it has a several drawbacks. The electrospinning method requires a high-voltage electric field and electrically conductive target, and this hinders the safe and cost-effective mass production of polymer nanofibers.

In response to this shortcoming, 'centrifugal spinning' that utilizes centrifugal force instead of high voltage to produce polymer nanofibers has been suggested as a safer and more cost-effective alternative to the electrospinning. Easy scalability is another advantage, as this technology only requires a rotating spinneret and a collector.

Inspired by these limitations, a research team led by professor Do Hyun Kim from the Department of Chemical and Biomolecular Engineering at KAIST developed a centrifugal multispinning spinneret with mass-producibility, by sectioning a rotating spinneret into three sub-disks. This study was published as a front cover article of ACS Macro Letters, Volume 10, Issue 3 in March 2021.

By integrating the mass-produced polymer nanofibers into the form of a multi-component fiber web, the researchers were able to fabricate mask filters that have comparable filtration performance with the filters used in KF80 and KF94 face masks that are currently available in the Korean market. The KF80 and KF94 masks have been approved by the Ministry of Food and Drug Safety of Korea to filter out at least 80% and 94% of harmful particles respectively.

"When our system is scaled up from the lab scale to an industrial scale, the large-scale production of centrifugal multispun polymer nanofibers will be made possible, and the cost of polymer nanofiber-based face mask filters will also be lowered dramatically," Kwak explained.