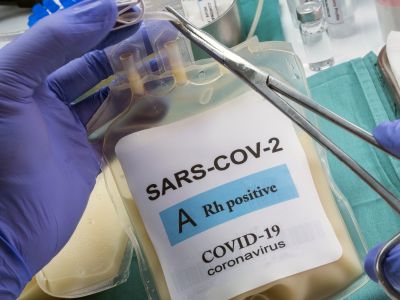 A randomized double-blind controlled trial of convalescent plasma for adults hospitalized with severe COVID-19 found that mortality at 28 days in the treatment arm was half the rate seen in the control arm (12.6% vs. 24.6%), although treatment was not associated with other improvements in clinical status.

According to the investigators, one possible explanation for the discrepancy between lack of clinical improvement and improved survival is that severely ill Covid-19 patients survived but remained hospitalized at their baseline status. The study also reports trends towards improved clinical status among patients who received convalescent plasma less than seven days after symptom onset and those who received convalescent plasma with higher-titers of neutralizing antibody and concomitant corticosteroids.

The investigators conducted this randomized, double-blind, placebo-controlled trial among adults hospitalized with severe and critical COVID-19 at 5 sites, including 73 patients enrolled in New York City and 150 enrolled in Rio de Janeiro. Patients were randomized in a 2:1 ratio to receive a single transfusion of either convalescent plasma or normal control plasma.

The median age of participants was 61 years and two-thirds of them were male. In a subset of nasopharyngeal swab samples from Brazil that underwent viral genomic sequencing, no evidence of neutralization-escape mutants was detected.

"We should not close the door prematurely on research into the therapeutic value of convalescent plasma research for severe COVID-19, particularly in the context of emerging viral variants in low- and middle-income countries," says first and corresponding author Max R. O'Donnell, MD, associate professor of medicine and epidemiology, and member of the Center for Infection and Immunity at Columbia Irving Medical Center. "Locally donated convalescent plasma has the potential to be highly responsive to local viral ecology and sustainable, since many countries already have the infrastructure needed to collect and transfuse donated plasma."

"This is the first clinical trial sponsored by the Global Alliance for Preventing Pandemics. It illustrates the role of international collaborations in responding to emerging infectious diseases," says W. Ian Lipkin, MD, director of the Center for Infection and Immunity and John Snow Professor of Epidemiology at Columbia University Mailman School of Public Health.

Observational studies have suggested possible clinical efficacy and safety using convalescent plasma, primarily among patients who were not receiving invasive mechanical ventilation and those with shorter durations of illness. Despite these signals, data from randomized controlled trials supporting the use of convalescent plasma in hospitalized COVID-19 patients are limited. Open-label trials, including the large Randomized Evaluation of COVID-19 Therapy (RECOVERY) trial, reported no significant improvements in clinical outcomes among patients hospitalized with severe COVID-19. A double-blind, placebo-controlled trial in Argentina also reported no improvement in clinical outcomes using the therapy with the same type of patients. Another Columbia-led is underway in Brazil to test the effectiveness of convalescent plasma in patients who have less severe disease.

Convalescent plasma may be donated and transfused locally, therefore its use may be more adaptable to a rapidly changing mix of SARS-CoV-2 variants than other interventions. In contrast, monoclonal antibody therapies may need to be repeatedly engineered and combined to optimize potency among emergent variants. Further, since the collection and distribution of convalescent plasma can be performed using existing blood donation protocols and infrastructure, the therapy may be more scalable for use in low- and middle-income countries.