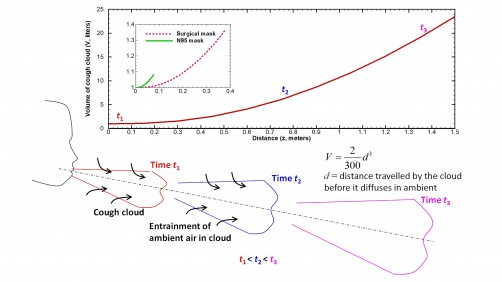 Volume of cough cloud generated by a human subject increases with time due to entrainment of the surrounding air into it (Bottom). Change in volume of the cloud as a function of distance from mouth (Top). Masks reduce the volume significantly as seen in the inset. Courtesy of Amit Agrawal and Rajneesh Bhardwaj

Researchers have increasingly focused on the extent to which airborne respiratory droplets carrying the virus travel and contaminate the air after an infected person coughs.

While scientists have studied the properties of air at the mouth, such as volume, temperature, droplet distribution, and humidity, less is known about how these properties change as the cough cloud travels. In Physics of Fluids, by AIP Publishing, researchers estimate the evolving volume of the cough cloud and quantify the reduction in its volume in the presence of a face mask.

“We estimate this volume of the air, which may help to design ventilation of closed spaces and consequently reduce the spread of the disease,” said Amit Agrawal, one of the authors.

The researchers also examined the variation in temperature and humidity in the cough cloud as the determinant that impacts the droplet distribution in the cloud.

Using an analysis based on jet theory and experimental data from the literature, they found that it’s the first 5 to 8 seconds after coughing that matter for suspending the exhaled droplets in the air and, consequently, for the spread of the disease. After that time, the cough cloud typically starts to disperse.

“We found that anything that reduces the distance traveled by the cloud, such as a mask, handkerchief, or coughing into an elbow, should greatly reduce the region over which the droplets disperse upon coughing and therefore the chances of infection,” said Rajneesh Bhardwaj, another author.

Interestingly, the researchers found how hard a person coughs, which impacts the initial velocity and volume of coughing, does not affect the volume in the cough cloud when the person is not wearing a mask, although the initial volume is very important for a person wearing a mask.

The scientists determined the volume of a cough cloud varies as a cube of the total distance traveled by the cloud with the proportionality constant being 1 to 150. This formula will be helpful in determining the maximum number of people that can be accommodated in a hospital ward, and the minimum rate at which air in a room, elevator, cinema hall, car, aircraft cabin, or restaurant needs to be circulated to maintain freshness and reduce the chance of infection.