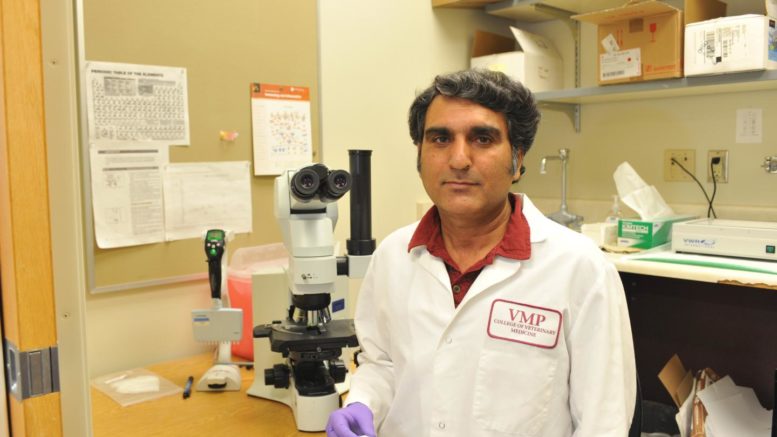 The next time a tick feeds on you, Washington State University researchers hope to make sure persistent arthritis caused by Lyme disease doesn't linger for a lifetime.

Troy Bankhead, associate professor in WSU's Veterinary Microbiology and Pathology department, and his team have spent more than a decade analyzing an immune evasive protein of Borrelia burgdorferi, the bacterium that causes tick-borne Lyme disease.

With the lab's latest finding, that work is beginning to pay off.

According to research recently published in Cell Reports, Bankhead and assistant research professor Abdul Lone discovered that a surface protein known as VlsE acts as a shield to prevent the immune system from effectively fighting the disease. In particular, the study examined how VlsE protects one of the main proteins responsible for Lyme disease's persistent arthritis.

"This really has a significant impact in the development of vaccines," Bankhead said. "If we can determine which proteins are shielded as opposed to which ones are not, then of course those that are not protected are going to be better candidates for a vaccine."

The Centers for Disease Control and Prevention estimates some 300,000 people may get Lyme disease each year in the United States alone. It is most prevalent in the northeast.

If not treated early with antibiotics, Lyme disease can cause lifelong arthritis, and in more severe cases, bladder infections, heart inflammation, and neurologic and cognitive issues like loss of memory and balance.

"We chose the arthritis-related protein because arthritis is the most common symptom you see in North America," Lone said.

By engineering a strain of Borrelia burgdorferi in the lab without the surface lipoprotein VlsE, they were able to confirm it was protecting the arthritis-related protein from an antibody response.

Bankhead and Lone tested the new Borrelia strain in mice and found the animals were more easily able to clear the infection.

Then, Bankhead and Lone confirmed that the new Borrelia strain was susceptible to antibodies under the microscope.

By using fluorescence microscopy, a process that uses energy from electrons to emit light under a microscope, Bankhead and Lone watched as antibodies were unable to bind to the protein responsible for Lyme's persistent arthritis when the VlsE protein was present.

When the VlsE protein was removed, antibodies were able to recognize and bind to the arthritis-related protein. "When you don't have VlsE those bacteria light up and that is because those antibodies are able to bind and recognize that arthritis-related protein in the absence of that VlsE shield," Bankhead said. "That's exactly what we were seeing."

Understanding the VlsE protein is acting as a shield for the bacterium's arthritic-causing protein is significant for vaccine development and future research. While it is unknown if other surface proteins are protected, Bankhead said it is likely. He noted the scientific community is gaining ground on understanding these proteins but producing any vaccine is well into the future.

Still, the finding creates two avenues for researchers to eliminate Lyme disease: take down the VlsE shield, or, find a way for the antibody response to get in front of the ever-adapting bacterium and eliminate it.

"HIV/AIDS persists for years in human beings. The same thing happens with Borrelia, it persists," Lone said. "While this finding tells us a lot about Borrelia. Our next step is to understand how it persists. Once we understand the mechanism of persistence, we can eliminate the disease."