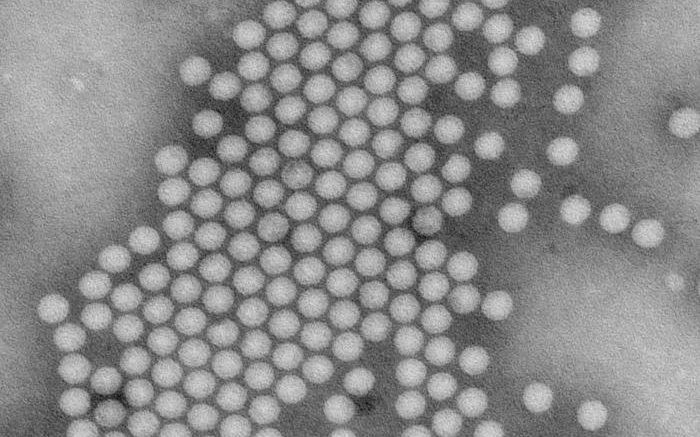 Before being halted due to the COVID-19 pandemic, a relentless vaccination campaign had nearly succeeded in eradicating polio from the world. Between 2000 and 2017, the World Health Organization (WHO) estimated that its campaign had reduced the burden of the disease by 99 percent, preventing more than 13 million children from becoming infected and risking potentially debilitating paralysis.

But in recent years, the eradication effort has been plagued by outbreaks of vaccine-derived polio -- in which the weakened virus used in oral polio vaccines evolved the ability to escape from vaccinated individuals and spread in communities with poor vaccination rates.

Now, with support from the Bill and Melinda Gates Foundation, UC San Francisco virologist Raul Andino, PhD, and Andrew Macadam, PhD, of the UK's National Institute for Biological Standards and Control (NIBSC) report promising Phase 1 clinical results for the first new oral polio vaccine in 50 years, which they have designed to be incapable of evolving the ability to cause disease in humans.

In a 2017 study, Andino and colleagues discovered that in every vaccine-derived polio outbreak they studied, the virus had used the same three evolutionary steps to mutate from harmless vaccine into a regional menace.

In their new study, published April 23, 2020 in Cell Host and Microbe, Andino, Macadam, and colleagues at the Gates Foundation, the Center for Vaccine Innovation and Access in Seattle, and the Centre for the Evaluation of Vaccination at the University of Antwerp have employed clever genetic wizardry based on decades of study of the poliovirus's biology to redesign the vaccine to ensure that is incapable of following this three-step pathway to re-evolve virulence. Specifically, they stabilized a region of the viral genome that is required for it to re-evolve the ability to infect humans, and ensured that the virus could not get rid of this modification even by exchanging genetic material with related viruses.

"To my knowledge, this is the first effort to rationally design a live attenuated virus based on detailed understanding on its biology, as opposed to the standard approach of blindly passaging the virus in animal cells to eliminate human virulence through poorly understood mechanisms," said Andino, a professor of microbiology and immunology at UCSF.

The new study presents results of a double blinded phase 1 clinical trial conducted in 15 adult volunteers at the University of Antwerp, all of whom had previously been vaccinated with an inactive vaccine composed of shredded virus particles to ensure they could not be made sick by the live vaccine.

The trial found that the new designer polio vaccine was both more stable and more effective than the 50-year old Sabin vaccine from which it was derived. Specifically, the new vaccine caused participants to generate plentiful antibodies against the poliovirus, and despite shedding viral particles in their stool, those particles were unable to infect or cause paralysis in mice. In contrast, previous studies have found that when mice are exposed to viral samples shed by people vaccinated with the standard Sabin oral polio vaccine, as many as 90 percent develop paralysis.

A phase 2 trial is currently underway and shows promise, Andino said, and the WHO is planning a phase 3 trial, hoping to fast-track development of the vaccine as an emergency measure to contain these outbreaks of vaccine-derived polio.

In the wake of the suspension of the WHO's polio eradication efforts during the COVID-19 crisis, Andino's lab is now applying all they've learned designing polio vaccines to the search for new approaches for a SARS-CoV-2 vaccine, including developing a mouse model to better understand exactly how the virus spreads and causes disease.

Dozens of other COVID-19 vaccine efforts are going after the low-hanging fruit of traditional vaccination using isolated viral particles or more advanced RNA-based vaccination, but Andino is working to understand the biological pathways within the virus that might be most amenable to transformation into a safe but effective live attenuated vaccine that could be rapidly produced for worldwide distribution.

"I believe the lesson of polio is that it will take time to develop an optimal vaccine against SARS-CoV-2, and early efforts are likely to meet with unexpected challenges," Andino said. "Once we do have safe and effective vaccines, they'll need to be produced at global scale, which will probably require the use of older technologies that are already in place. Given how little we know about this new coronavirus, I'm betting we'll need all the weapons we can muster."

Ming Te Yeh of UCSF was the study's lead author. Macadam and Andino are co-corresponding authors. Additional authors on the paper were Patrick T. Dolan of UCSF; Erika Bujaki and Matthew Smith of the National Institute for Biological Standards and Control in the UK; Rahnuma Wahid, and John Konz of the Center for Vaccine Innovation and Access in Seattle; Amy J. Weiner and Ananda S. Bandyopadhyay, of the Bill and Melinda Gates Foundation in Seattle; and Pierre Van Damme, Ilse De Coster and Hilde Revets of the Centre for the Evaluation of Vaccination at the University of Antwerp.