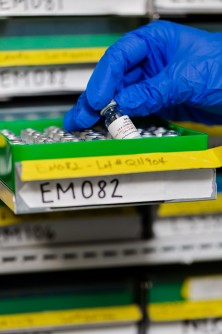 Mirroring the all-hands-on-deck collaborative approach that accelerated the development of a variety of COVID-19 vaccines during the pandemic, the National Institutes of Health is seeking to spark similar innovation for a longstanding, intractable disease: tuberculosis. As part of this national push, NIH’s National Institute of Allergy and Infectious Diseases awarded Texas Biomedical Research Institute (Texas Biomed) and The Access to Advanced Health Institute (AAHI) in Seattle, a $3.5 million, five-year Innovation for Tuberculosis Vaccine Discovery grant.

Tuberculosis (TB) infects more than 10 million people globally a year, and killed more than 1.5 million in 2020. Before COVID-19, it was the leading cause of death by a single infectious agent. The only approved TB vaccine, which is used widely in other countries, but not in the U.S., primarily protects children as it loses efficacy as people age.

“Tuberculosis is an infectious disease that’s caused immense human mortality and suffering for thousands of years. We need to do better,” says Texas Biomed staff scientist and adjunct associate professor Gillian Beamer, VMD, PhD, DACVP, and the grant’s principal investigator. “This collaboration is exciting because we are bringing scientists with different expertise together to tackle this challenge.”

Researchers at AAHI, led by Christopher Fox, PhD, and Emily Voigt, PhD, are developing several TB vaccine candidates. They are building on extensive experience designing protein and RNA vaccine candidates based on AAHI’s immune-enhancing platforms, both of which incorporate adjuvant technology. Adjuvants are components that make vaccines more effective by enhancing the body’s immune response. They will evaluate how various vaccine combinations administered in two doses perform in the lab.

A unique feature of the research project will be the animal models helping test the most promising vaccines at Texas Biomed. They will not be your typical lab mice.

“The most commonly used laboratory mice are genetically identical to each other,” Beamer says. “While that is preferred to study specific cellular and molecular mechanisms, for us, it’s analogous to studying how only one person might react to a vaccine or therapy.”

Instead, she is relying on mice that have been specifically bred to represent the genetic diversity of the human population. This will enable the team to see how individuals with different genetic backgrounds respond to the vaccines.

The team aims to leverage the genetic diversity of the mice to identify vaccines that will protect those most susceptible to TB. This will be one of the first times this population of mice, called the Diversity Outbred mouse population, and a related group called Collaborative Cross inbred mice, will be used to test novel vaccines.

Fox, who is AAHI’s senior vice president of formulations, underscored how this is truly innovative for vaccine development, which is required to begin with animal testing before testing in humans. “The data we are going to get out of this is going to be much more meaningful than typical preclinical data,” he says.

The team is excited and optimistic. AAHI already has an adjuvanted-protein TB vaccine performing well in phase 2 clinical trials.

“The adjuvant in that vaccine was developed a number of years ago, and we’ve made several important advances since then in adjuvant technology,” Fox says. “We want to test those new adjuvant systems to see if we can do better than what’s out there already.”

Fox will test various adjuvants, some of which incorporate elements developed by close collaborators at 3M. New adjuvants could not just benefit TB vaccines, but vaccines for other diseases as well.

As these TB vaccines advance further, AAHI researchers plan to investigate different ways to make them thermostable, so they last for several months at room temperature or several years in standard refrigerators. This would eliminate the need for extreme cold storage such as what was required for the first generation of mRNA COVID-19 vaccines.

“We’ve recently had success with freeze-dried technology vastly extending the storage life of mRNA vaccines, and will look to apply that here as the research proceeds,” AAHI’s Voigt says. “It’s very important to us to increase the practicality of getting vaccines to people who need them most around the world.”