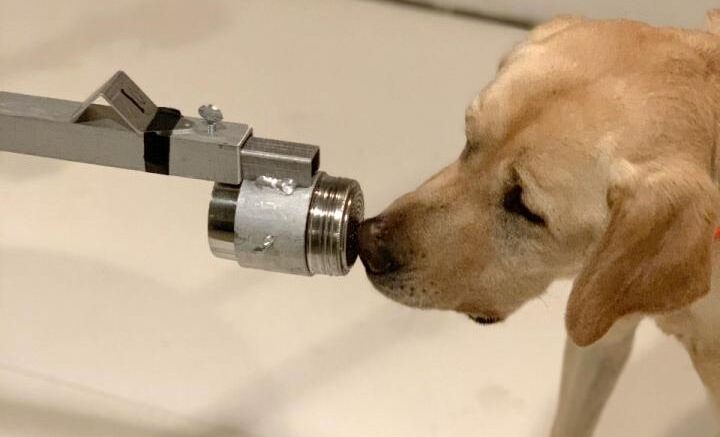 Poncho, a two-and-a-half year old yellow Labrador retriever, was one of the dogs trained in a Penn Vet-led study to see if his and his fellow canines' sensitive noses could discriminate positive from negative SARS-CoV-2 samples. They were able to do so with 96% accuracy. Courtesy of Pat Nolan

Many long for a return to a post-pandemic "normal," which, for some, may entail concerts, travel, and large gatherings. But how to keep safe amid these potential public health risks?

One possibility, according to a new study, is dogs. A proof-of-concept investigation published today in the journal PLOS ONE suggests that specially trained detection dogs can sniff out COVID-19-positive samples with 96% accuracy.

"This is not a simple thing we're asking the dogs to do," says Cynthia Otto, senior author on the work and director of the University of Pennsylvania School of Veterinary Medicine Working Dog Center. "Dogs have to be specific about detecting the odor of the infection, but they also have to generalize across the background odors of different people: men and women, adults and children, people of different ethnicities and geographies."

In this initial study, researchers found the dogs could do that, but training must proceed with great care and, ideally, with many samples. The findings are feeding into another investigation that Otto and colleagues have dubbed "the T-shirt study," in which dogs are being trained to discriminate between the odors of COVID-positive, -negative, and -vaccinated individuals based on the volatile organic compounds they leave on a T-shirt worn overnight.

"We are collecting many more samples in that study--hundreds or more--than we did in this first one, and are hopeful that will get the dogs closer to what they might encounter in a community setting," Otto says.

Through the Working Dog Center, she and colleagues have had years of experience training medical-detection dogs, including those that can identify ovarian cancer. When the pandemic arrived, they leveraged that expertise to design a coronavirus detection study.

Collaborators Ian Frank from the Perelman School of Medicine and Audrey Odom John from the Children's Hospital of Philadelphia provided SARS-CoV-2-positive samples from adult and pediatric patients, as well as samples from patients who had tested negative to serve as experimental controls. Otto worked closely with coronavirus expert Susan Weiss of Penn Medicine to process some of the samples in Penn's Biosafety Level 2+ laboratory to inactivate the virus so they would be safe for the dogs to sniff.

Because of workplace shutdowns due to the pandemic, instead of working with dogs at Penn Vet, the researchers partnered with Pat Nolan, a trainer with a facility in Maryland.

Eight Labrador retrievers and a Belgian Malinois that had not done medical-detection work before were used in the study. First the researchers trained them to recognize a distinctive scent, a synthetic substance known as universal detection compound (UDC). They used a "scent wheel" in which each of 12 ports is loaded with a different sample and rewarded the dog when it responded to the port containing UDC.

Processing the results with assistance from Penn criminologist and statistician Richard Berk, the team found that after three weeks of training all nine dogs were able to readily identify SARS-CoV-2 positive samples, with 96% accuracy on average. Their sensitivity, or ability to avoid false negatives, however, was lower, in part, the researchers believe, because of the stringent criteria of the study: If the dogs walked by a port containing a postive sample even once without responding, that was labeled a "miss."

The researchers ran into many complicating factors in their study, such as the tendency of the dogs to discriminate between the actual patients, rather than between their SARS-CoV-2 infection status. The dogs were also thrown off by a sample from a patient that tested negative for SARS-CoV-2 but who had recently recovered from COVID-19.

"The dogs kept responding to that sample, and we kept telling them no," Otto says. "But obviously there was still something in the patient's sample that the dogs were keying in on."

Major lessons learned from the study, besides confirming that there is a SARS-CoV-2 odor that dogs can detect, were that future training should entail large numbers of diverse samples and that dogs should not be trained repeatedly on the samples from any single individual.

"That's something we can carry forward not only in our COVID training but in our cancer work and any other medical detection efforts we do," says Otto. "We want to make sure that we have all the steps in place to ensure quality, reproducibility, validity, and safety for when we operationalize our dogs and have them start screening in community settings."