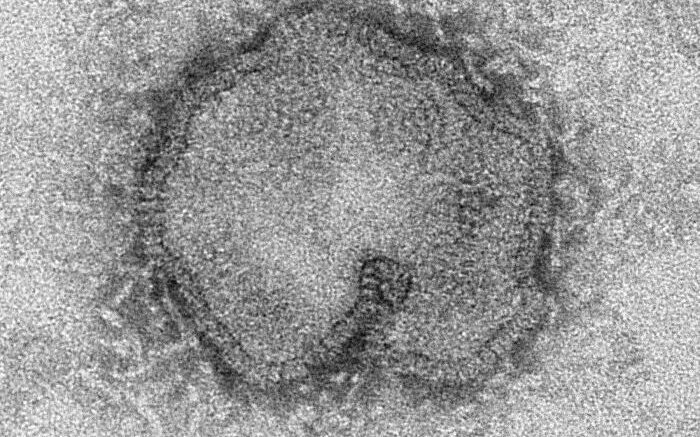 This negative stained transmission electron microscopic (TEM) image captured some of the ultrastructural details exhibited by the influenza A virus. Courtesy of CDC/Cynthia S. Goldsmith and Thomas Rowe

For the first time in published literature, Le Bonheur Children's Hospital and University of Tennessee Health Science Center (UTHSC) researchers showed that a variety of white blood cells known as eosinophils modify the respiratory barrier during influenza A (IAV) infection, according to a recent paper in the journal Cells. This research could have implications in understanding SARS-CoV-2 (COVID-19) infection in asthmatic patients.

The Le Bonheur/UTHSC study found that eosinophils immunomodulate airway epithelial cells during IAV infection, helping to neutralize the virus and protect the airway. The study was led by University of Tennessee Health Science Center Postdoctoral Fellow Meenakshi Tiwary, PhD, from the lab of Director of the Pediatric Asthma Research Program and Plough Foundation Chair of Excellence in Pediatrics, Amali Samarasinghe, PhD, in collaboration with Robert Rooney, PhD, assistant professor of pediatrics at the University of Tennessee Health Science Center and director of the Biorepository and Integrative Genomics Initiative at Le Bonheur, and Swantje Liedmann, PhD, a postdoctoral fellow at St. Jude Children's Research Hospital.

"We examined eosinophil responses to influenza A virus during the early phase of infection and found that eosinophils exhibit multiple functions as active mediators of antiviral host defense," said Samarasinghe. "These include virus neutralization, trafficking to draining lymphoid organs and, most importantly, protecting the airway barrier from virus-induced cytopathology."

Eosinophils are activated within 20 minutes of virus infection. As a result of IAV infection, eosinophil movement into and out of the lungs increased, and activated eosinophils expressed markers necessary to migrate into lymphoid organs from the site of infection

Crosstalk between airway epithelial cells and eosinophils promotes activation in both cell types. The presence of eosinophils reduced expression of specific surface markers in epithelial cells when placed in close proximity during IAV infection. This is especially important given that this study provides direct evidence that eosinophils are not toxic to host tissue.

This study builds on research from Samarasinghe's lab investigating why asthmatics were less likely to suffer from severe disease than non-asthmatics during the swine flu pandemic of 2009. Previous research has shown that eosinophils have a higher prevalence in asthmatic lungs and aided patients during infection.

"Reports from the COVID-19 pandemic have early indicators that patients with allergic asthma are not at increased risk of severe COVID-19," said Samarasinghe. "It is tempting to speculate that eosinophils may play an antiviral role against SARS-CoV-2, similar to their function against influenza A and other virus infections."