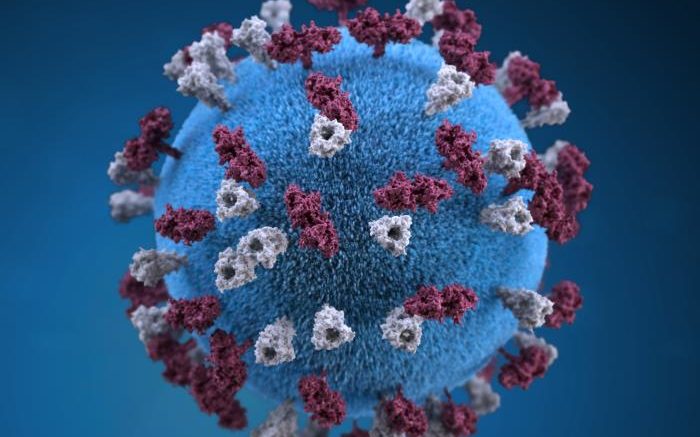 This illustration provides a 3D graphical representation of a spherical-shaped, measles virus particle that is studded with glycoprotein tubercles. Those tubercular studs colorized maroon, are known as H-proteins (hemagglutinin), and those colorized gray are referred to as F-proteins (fusion). The F-protein is responsible for fusion of virus and host cell membranes, viral penetration, and hemolysis, and the H-protein is responsible for binding of virus to cells. Both types of proteinaceous studs are embedded in the envelope’s lipid bilayer. Courtesy of CDC/Allison M. Maiuri, MPH, CHES

Following several years of steady progress toward elimination of measles in the World Health Organization (WHO) European Region, the number of countries having achieved or sustained elimination of the disease has declined. This was the conclusion of the European Regional Verification Commission for Measles and Rubella Elimination (RVC) based on an assessment of annual status updates for 2018 submitted by the 53 member states of the region.

The RVC determined that for the first time since the verification process began in the Region in 2012, four countries (Albania, Czechia, Greece and the United Kingdom) lost their measles elimination status.

“Re-establishment of measles transmission is concerning. If high immunization coverage is not achieved and sustained in every community, both children and adults will suffer unnecessarily and some will tragically die,” says Dr. Günter Pfaff, chair of the RVC.

The RVC concluded that Austria and Switzerland attained elimination status, having demonstrated the interruption of endemic transmission for at least 36 months.

For the region as a whole, as of the end of 2018, 35 countries are considered to have achieved or sustained measles elimination (compared to 37 for 2017), two have interrupted the endemic transmission of measles (for 12–35 months), 12 remain endemic for measles and four that had previously eliminated the disease have re-established measles transmission.

The ongoing circulation of measles in the region continues to be internally classified within WHO as a Grade 2 emergency. This designation allows WHO to mobilize the technical, financial and human resources needed to support the affected countries.

“Great efforts to control this highly contagious disease have brought us a long way towards regional elimination. However, ongoing measles outbreaks demonstrate that more is needed. Through activation of the emergency response, WHO has increased its focus on measles elimination and upgraded its action. This is the time and opportunity to address any underlying health system, social determinants and societal challenges that may have allowed this deadly virus to persist in this Region,” says Dr. Zsuzsanna Jakab, WHO regional director for Europe.

The RVC is an independent panel of experts that meets annually to assess measles elimination status in the Region based on extensive annual reports submitted by each country. It met June 12-14, 2019 in Warsaw, Poland to evaluate reports for 2018 and based its conclusion on several factors including measles surveillance data, routine immunization coverage, outbreak response, and the reach of supplemental immunization campaigns and other activities.

The RVC also concluded that the situation for rubella has improved. 39 countries achieved or sustained elimination status (compared to 37 in 2017), three interrupted endemic transmission (compared to 5 in 2017) and 11 countries continue to be considered endemic for rubella.