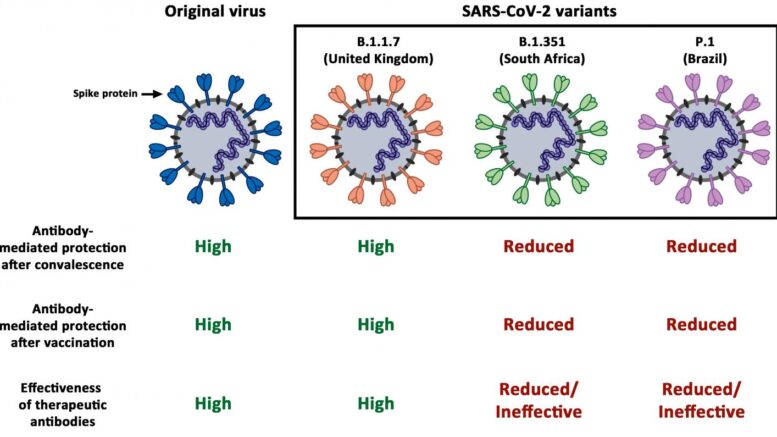 Testing and vaccination -- these are the pillars on which humanity is trying to get a grip on the coronavirus pandemic. Although it is taking longer than many had expected, it is believed that it is only a matter of time before we are all vaccinated and thus protected. However, time is also working for the virus, which has now mutated several times, with variants B.1.1.7 from the United Kingdom, B.1.351 from South Africa and P.1 from Brazil spreading rapidly. These viruses have mutations in the so-called spike protein, the structure on the surface of the virus that is responsible for attachment to host cells.

At the same time, the spike protein is also the major target of the immune response. Antibodies generated in response to SARS-CoV-2 infection or vaccination bind to the spike protein, thereby blocking the virus. A team led by Markus Hoffmann and Stefan Pöhlmann of the German Primate Center - Leibniz Institute for Primate Research and Jan Münch of the Ulm University Medical Centre has found that the SARS-CoV-2 variants B.1.351 and P.1 are no longer inhibited by an antibody used for COVID-19 therapy. In addition, these variants are less efficiently inhibited by antibodies from recovered patients and vaccinated individuals. Thus, convalescence from COVID-19 as well as vaccination may offer only incomplete protection against these mutant viruses.

SARS-CoV-2 viruses invade lung cells in order to multiply. For the virus to enter a cell, it must first attach to the cell surface. For this, the virus uses its so-called spike protein, which is located on the viral envelope. The spike protein is also the target for therapies and vaccines aimed at preventing the virus from replicating in the body.

At the beginning of the pandemic, SARS-CoV-2 was relatively stable, but recently several viral variants have been detected and are spreading rapidly. Variants B.1.1.7, B.1.351, and P.1, which first appeared in the United Kingdom, South Africa, and Brazil, respectively, have mutations in the spike protein and some are located in areas targeted by currently used antiviral agents and vaccines.

"This is worrisome because the rapid spread of variants that might not be efficiently inhibited by antibodies could undermine our current vaccination strategy," says Stefan Pöhlmann, an infection biologist at the German Primate Center in Göttingen. Therefore, the team led by Pöhlmann and Münch investigated how effectively the mutant viruses are inhibited by drugs and antibodies.

"We found that certain antiviral agents that block host cell entry and are in (pre)clinical development inhibit the mutant viruses just as well as the original virus. Variant B1.1.7, which is currently spreading rapidly in Germany, was also efficiently inhibited by antibodies, including antibodies induced by vaccination. In contrast, an antibody used for COVID-19 therapy did not inhibit variants B.1.351 and P.1. Moreover, these variants were less well inhibited by antibodies from convalescent or vaccinated individuals, they partially bypassed the neutralizing effect of the antibodies," says Münch. The use of the currently available vaccines makes sense and a rapid expansion of the vaccination efforts in Germany is desirable. However, it is possible that vaccination or recovery from COVID-19 may offer reduced protection from SARS-CoV-2 variants B.1.351 and P.1."

Clinical studies must now show the extent to which this fear is true.

"Our findings show that it is important to limit the spread of the virus as much as possible until widespread vaccination is feasible. Otherwise, we risk the emergence of new variants that cannot be effectively controlled by the currently available vaccines" says Hoffmann, first author of the study.