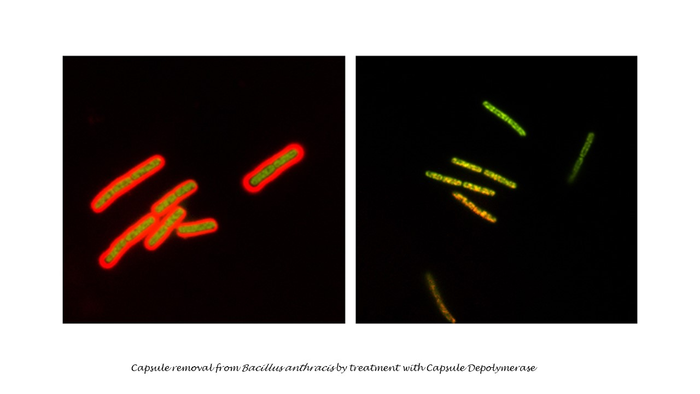 Scientists have demonstrated that modifying an enzyme produced by the bacterium that causes anthrax can protect mice from infection with the deadly disease. Their findings, published in today’s online edition of Science Translational Medicine, suggest a potential therapeutic strategy for treating multidrug-resistant strains of anthrax, and could lead to new treatments for other bacterial infections.

Bacillus anthracis, the bacterium that causes anthrax, is recognized as one of the most significant bioterrorism threats, as well as a public health challenge in many parts of the world. Three main components allow it to cause disease—lethal toxin, edema toxin, and capsule. In this study, the researchers developed a method to degrade the capsule surrounding the bacterium, allowing it to be ingested and destroyed by the white blood cells—thus reducing virulence.

Public health officials have become increasingly concerned about strains of anthrax that appear to be resistant to treatment with known antibiotics, according to Arthur M. Friedlander, MD, the paper’s senior author. He and his team at the U.S. Army Medical Research Institute of Infectious Diseases (USAMRIID) worked with investigators at the U.S. Naval Research Laboratories, the University of Washington in Seattle, and the University of California at Davis to explore alternative treatment approaches that do not rely on the use of antibiotic drugs.

One promising avenue is to make the bacterium more susceptible to the innate immune system—the human body’s first line of defense against a pathogenic “invader.” The innate immune response consists of physical, chemical and cellular defenses that work to immediately prevent the spread of foreign pathogens throughout the body. Enzymes known as capsular depolymerases, which are naturally produced by several classes of bacteria, have emerged as a potential new line of antivirulence agents.

“Identification of the capsule depolymerase enzyme within the anthrax bacillus led us to attempt to use that enzyme to remove the capsule,” said Friedlander. “When this proved successful, we utilized recombinant DNA technology and protein engineering methods to engineer and reconfigure the enzyme in new ways.”

Those “engineering changes” included circular permutation by protein design, to enhance stability and make the enzyme easier to produce, and pegylation, which improves the enzyme’s pharmacokinetics—the properties that allow it to be absorbed and properly distributed within the body. The team then tested the pegylated enzyme, known as PEG-CapD-CPS334C, to be sure it had retained its enzymatic activity.

In the study, 10 of 10 mice infected with anthrax spores from a nontoxigenic encapsulated strain were completely protected after treatment with PEG-CapD-CPS334C, while only 1 of 10 mice receiving a control treatment survived. Similarly, treatment of mice infected with a fully virulent encapsulated strain using PEG-CapD-CPS334C protected 8 of 10 animals, while only 2 of 10 control animals survived.

“This strategy renders B. anthracis susceptible to the innate immune responses and does not rely on antibiotics,” the authors concluded. “These findings suggest that enzyme-catalyzed removal of the capsule may be a potential therapeutic strategy for the treatment of multidrug-resistant anthrax and other bacterial infections.”

It could also allow Warfighters exposed to anthrax through natural or other means to be treated at the time of exposure or shortly thereafter, preserving combat power in forward areas where advanced diagnostics and treatments may not be readily available.