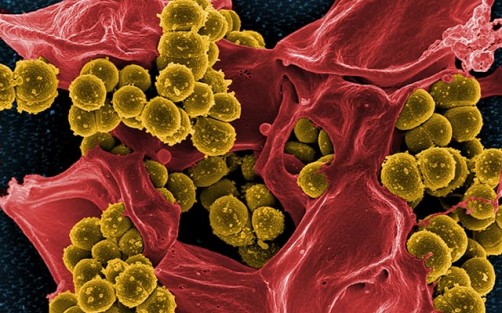 For the most part, the bacterium Staphylococcus aureus is common and harmless, posing no threat to humans with whom they coexist. Occasionally, though, it can become an opportunistic pathogen, causing skin and bloodstream infections or food poisoning.

For more than a century, scientists have searched for an effective vaccine, including at least 15 successful preclinical studies using animal models in the past 30 years. In all of the subsequent human trials, however, these vaccine candidates failed.

“It’s a longstanding and one of the most enigmatic issues of the staphylococcal field,” said George Liu, MD, PhD, professor of pediatrics at University of California San Diego School of Medicine and chief of the Division of Infectious Diseases at Rady Children’s Hospital-San Diego. “None of these human trials have worked and scientists have struggled to find a reason.”

The question has gained greater urgency with the spread of methicillin-resistant S. aureus (MRSA), a type of staph bacteria that has become increasingly resistant to antibiotics commonly used to treat ordinary staph infections. MRSA is the primary source of infections acquired within hospitals and other healthcare settings, such as nursing homes. A study published in 2022 estimated that bacterial antimicrobial resistance resulted tens of millions of infections and 1.2 million deaths worldwide in 2019, with MRSA as the primary driver.

“Vaccines are the most effective way to cut down that health burden and reduce antibiotic resistance,” said Liu, pointing to successes with childhood inoculations and the more recent COVID-19 vaccines.

In a new paper, publishing July 7, 2022 in the journal Cell Host & Microbe, senior author Liu and colleagues say they may have found the answer to the conundrum of S. aureus, including the mechanism that explains why vaccine trials have so far failed and ways to overcome that.

Fundamentally, the difference lies in prior exposure to the pathogen, the authors write. Laboratory mice used in research are engineered (bred/raised/maintained) to be free of the specific target pathogen; they have had little or no exposure to S. aureus prior to vaccination.

Humans, by contrast, are very quickly exposed to S. aureus after birth. Within two months, half of babies host active colonies and abundant antibodies to fend off most infections.

With first author Chih-Ming Tsai, PhD, a project scientist in his lab, and others, Liu hypothesized that while laboratory mice with no previous exposure to S. aureus respond well to potential vaccines because they are entirely new, human versions do not work because S. aureus has evolved defenses to fend off therapeutic attack.

“Staph vaccines appear so easy to make in laboratory mice because they rarely see S. aureus, but humans are exposed to staph beginning in the first weeks of life and, in order to coexist, staph appears to have developed many strategies to render ineffective our immune response against them,” Tsai said.

“If mice had staph infections before vaccination, we think that the vaccine candidates might not work.”

To test their hypothesis, Liu, Tsai and co-authors conducted a series of experiments simulating one of the largest failed staph vaccine trials in humans, which targeted the IsdB protein used by S. aureus to acquire needed iron for functioning.

When researchers tried mixing human IsdB antibodies with protective antibodies made from the vaccine, the latter stopped working. “We surmised that if we could vaccinate only against the protective component of IsdB, we might be able to prevent suppression by bad immune response memory,” said Tsai.

And, in fact, that is what the scientists found: When they vaccinated mice solely against the protective component of the IsdB protein, the animals were effectively protected, even if previously exposed to S. aureus.

In combination with other experiments, Liu said the findings suggest that faulty memory of a pathogen and its corresponding immune response are likely explanations for the failed staph vaccine trials in humans.

“It is even possible that the same principle might also explain why many other hard-to-make vaccines have failed,” he said. “If we are proven correct, an effective staph vaccine may not be too far away.”