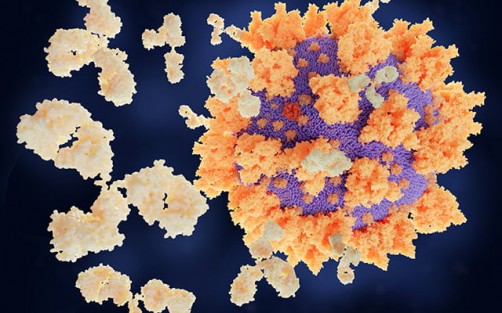 Neutralizing antibodies develop within two weeks of a SARS-CoV-2 infection, but their durability and intensity can vary by individual, prompting concerns about the prospects of long-lasting immunity and efficacy of COVID-19 vaccines.

In a PLOS ONE paper, published online Feb. 11, 2021, researchers at University of California San Diego School of Medicine report that individual immune response to SARS-CoV-2, the virus that causes COVID-19, may be limited by the major histocompatibility complex or MHC, a set of variable genes that code for cell surface proteins essential for the adaptive immune system.

“The immune system responds to invading pathogens by producing antibodies aimed at intercepting and neutralizing the pathogen,” said Zanetti. “The production of antibodies against proteins requires productive cooperation between the T lymphocyte and the B lymphocyte, which must both recognize adjacent antigen sequences initiated by the MHC on B cells. Peptide sequences in close proximity engage the two cells preferentially and non-randomly. The MHC serves as the link between the T and B lymphocytes in this process.”

Based on this reasoning, the researchers computationally analyzed all possible fragments of the spike protein RBM, which is a trigger for both the human immune response and for vaccine activity, in connection with the more than 5,000 different MHC molecules represented in the global human population.

To their surprise, the authors found that the average propensity of the MHC to display RBD-derived peptides is low. Since MHC binding is an indirect measure of the probability that the T cell will be activated and stimulate the B lymphocyte into producing antibodies against the RBM, the authors said it follows that the production of RBM-specific antibodies could be hampered by the poor fitting of these portions of the virus to the MHC.

“This then could lead to poorer neutralizing antibody responses,” said first author Andrea Castro, a member of Carter’s lab. “And in the case of SARS-CoV-2, the poor presentation of key RBD fragments by many MHC alleles could stand as an obstacle to the production of neutralizing antibodies targeting the RBM.”

The scientists suggest that the immunological history of individuals may play a role in T cell response and subsequent activation of B lymphocytes that can produce robustly targeted neutralizing antibodies.

The potential implications of the study are twofold, said Carter.

“One is that the ability to generate antibodies with potent neutralization activity may vary considerably from individual to individual within the general population, reflecting the large genetic diversity of the MHC. The other is that lack of effective cooperation between T and B lymphocytes may affect the longevity of neutralizing antibody responses in infected people.”

“To these considerations, one may add the impact of the newly discovered mutations in the RBM, such as those in the UK, South African and Brazilian variants of the virus,” said Zanetti. The topology of the mutations in these new variants is indicative of further potential breakdown of the immunological relay between T and B lymphocytes, with additional negative impact on the ability of individuals in the global population to generate high quality and long-lived neutralizing antibody responses against SARS-CoV-2.”

Funding for this study came, in part, from a National Institutes of Health National Library of Medicine Training Grant (T15LM011271), an Emerging Leader Award from The Mark Foundation for Cancer Research, a CIFAR fellowship and the NIH (RO1CA220009).