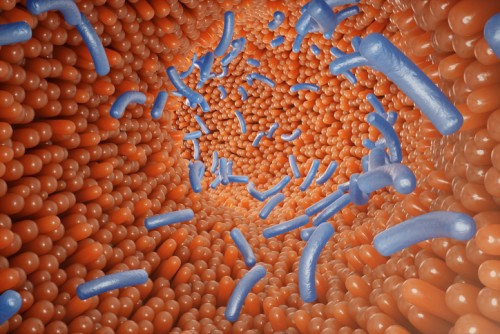 A study published in Cell Host & Microbe reports that the increased presence of certain bacteria in a gut biome indicates a greater likelihood that colon polyps will become cancerous.

In his research, William DePaolo, associate professor at the University of Washington School of Medicine, tracked 40 patients who had undergone routine colonoscopies and had biopsies taken near the polyps to identify bacteria present at relatively higher levels compared with those of patients who were polyp-free. All the patients were between the ages 50 and 75, and 60% were women.

“The rising incidence of colorectal cancer is a major health concern, but little is known about the composition and role of microbiota associated with precancerous polyps,” the study states.

DePaolo’s research team found that a common bacteria, non-enterotoxigenic Bacteroides fragilis, was elevated in the mucosal biopsies of patients with polyps.

The research also found distinct microbial signatures distinguishing patients with polyps from those without polyps, and established a correlation between the amount of B. fragilis in the samples and the inflammation of small polyps.

“The whole idea is that most people look at advanced colorectal cancer and think of the microbiome, but it’s hard to determine if the microbiome has changed and when it changed,” DePaolo said. “So we took an earlier look at the disease and asked when might the microbiome may be pushing a polyp toward cancer.”

Also, when people think of the microbiome and its role in disease, they often think of compositional changes where a potentially dangerous bacteria takes over, he added.

“What our data suggests is that, in order to survive within an environment where metabolic and inflammatory changes are occurring, a normally healthy gut and related bacteria may adapt in such a way that causes it to contribute to the inflammation rather than suppress it,” DePaolo explained.

Only 5% of the polyps in the colon actually turn out to be cancerous, he said. He said polyps seem to develop in the same areas of the colon repeatedly – and he theorized that in fact new screenings for colon cancer could look for key bacteria inhabiting the gut – and the amounts of this particular strain of B. fragilis – before pre-cancerous polyps even develop.

Colorectal cancer is the third leading cause of cancer in the United States, and its incidence is rising among younger adults. If a screening were available to test the microbes, before a polyp even appears, it could be a key factor to drive these rates down, DePaulo suggested.

The next step, he said, is to expand the study to 200 patients to determine whether a fecal sample might be used as a surrogate for the mucosal biopsy.

Source: University of Washington School of Medicine and UW Medicine