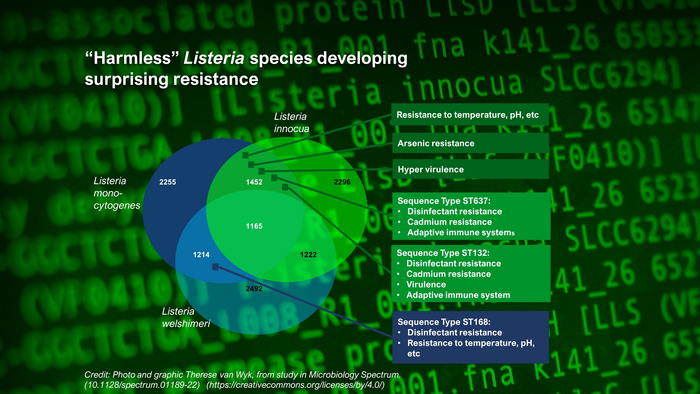 Food-borne bacteria Listeria innocua and L. welshimeri are often regarded as harmless, compared to the deadly Listeria monocytogenes. But both these species are developing an unexpected number of harmful characteristics that can make food safety measures more difficult to maintain, shows a Whole Genome Sequencing study from South Africa. Some strains analysed have virulence genes identical to that of L. monocytogenes. Courtesy of Therese van Wyk.

In the food processing industry, the deadly bacteria Listeria monocytogenes is monitored closely. Not only can the bacteria make people extremely ill, it is known to be developing resistance to various food safety measures across the world.

However, two ‘harmless’ species of Listeria are also developing a surprising number of characteristics potentially harmful to humans.

A whole genome sequencing (WGS) study in South Africa, from a team of researchers with first author Dr. Thendo Mafuna at the University of Johannesburg, shows some of the changing characteristics of Listeria found in the country.

The study shows that Listeria innocua strains are developing resistance to temperature, pH, dehydration and other stresses; as well as hypervirulence genetically identical to that of Listeria monocytogenes.

Some strains of L. innocua and L. welshimeri in the study show all three genes for resistance to a widely-used disinfectant, from the quaternary ammonium compound (QAC or QUAT) group of chemicals.

Two strains of L. innocua they analyzed have developed three or more concerning pathogenic characteristics, including CRISPR CAS-type adaptive immune systems. The two non-pathogenic strains of Listeria were sampled in raw, dried and processed meats at commercial food processing facilities in the country.

The study confirms other research showing growing resistance in non-pathogenic Listeria species in other parts of the world.

“The Listeria innocua that we tested has some of the genes that are also found in pathogenic Listeria monocytogenes,” says Mafuna, from the Department of Biochemistry.

These shared genes between L. innocua and L. monocytogenes are also responsible for disease in humans; and stress tolerance such as resistance to the disinfectant Benzalkonium chloride (BC or BAC).

Research from others has shown that though Listeriosis is rarely caused by L. innocua, it does happen more often in people with compromised immune systems, he adds.

Benzalkonium chloride (BAC) is a member of a group of chemicals called Quaternary ammonium compounds, or QUATs. Quats are found in many common disinfectant products. They have been shown to be highly effective at killing bacteria, fungi and viruses.

All the L. innocua strains they tested also had the complete LIPI-4 hypervirulence gene sequence, which can cause disease in humans, he says. The LIPI-4 sequence they found in L. innocua is identical to that found in pathogenic L. monocytogenes, as recorded by the Pasteur Institute in Paris.

The samples and isolates analyzed in this study were collected between 2014 and 2019 by the South African Government’s Department of Agriculture, Land Reform and Rural Development (DALRRD). These were submitted to the Agricultural Research Council (ARC) at Onderstepoort Veterinary Research SA for analysis.

The isolates came from raw whole, raw processed, dried, and processed cooked, beef, chicken and pork meats. Dr. Itumeleng Matle at the Bacteriology Division, ARC in Onderstepoort did the microbiological analysis of Listeria isolation and identification.

The WGS was done by Dr. Rian E. Pierneef at the ARC’s Biotechnology Platform at Onderstepoort.

Mafuna then compared the genome sequences with those recorded by the Pasteur Institute and performed the analysis for the study.

“We need to look at our own facilities in South Africa to really see what is happening. Our analyses of these bacteria can help us predict which sequence types to be on the look out for,” says Mafuna.

It is the number of harmful characteristics that the L. innocua strains share with L. monocytogenes that is concerning, he adds.

Food processors need to look out for Listeria innocua because it is becoming resistant to disinfectants that are used in industry to get rid of them. It would also be helpful to try different types of disinfectants to surfaces, he says. Switching from one type to another may prevent or delay the bacteria developing resistance to one type of disinfectant.

“Big industrial food processors may want to investigate how efficient BC or quat disinfectants are in their facilities. This can be done by taking swabs before cleaning and again after cleaning, culturing those, to see how well the disinfectant regimes are working,” says Mafuna.