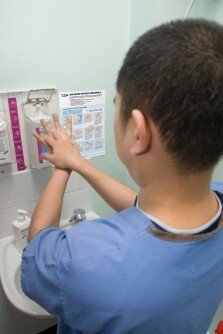 Researchers from the Department for Molecular and Medical Virology and the chair of Materials Discovery and Interfaces at Ruhr-Universität Bochum (RUB) found that the variants have a similar surface stability as the wild type virus under laboratory conditions, but can be effectively eliminated by disinfection and thorough handwashing, heat or alcohol treatment. They report their results in the Journal of Infectious Diseases.

For this study, the RUB team cooperated with the European Virus Bioinformatics Center Jena, the University Hospital Duisburg-Essen and Paracelsus Medical University Nuremberg.

The fact that viruses change genetically over time is well known. Variants of concern are those that give the virus an advantage, for example by allowing it to replicate faster, become more infectious or enable it to evade the immune response. The British and South African variants have accumulated several mutations which result in an increased transmission and, in some cases, lead to more severe courses of disease. "Therefore, the question arose whether they also differ from the original variant in terms of their sensitivity to hygiene measures," explains Toni Meister from Ruhr-Universität Bochum.

For this reason, the team analyzed how long the variants remain infectious on surfaces made of steel, silver, copper and on face masks and how they can be rendered harmless by means of soap, heat or alcohol.

It turned out that both variants, as well as the wild type virus, could be inactivated when treated with at least 30 percent alcohol for at least 30 seconds. "Common disinfectants are therefore effective against all these variants," says Stephanie Pfänder from RUB. Thorough handwashing with soap could also lower the risk of infection. Heat also works against the virus; after 30 minutes at 56 degrees Celsius, all variants were rendered harmless.

To find out whether the stability of the different mutant variants on surfaces differs from each other, they analyzed the amount of infectious virus particles on surfaces made of steel, copper, silver and on surgical and FFP2 masks over 48 hours.

"The surface stability did not differ between the virus variants," points out Eike Steinmann from the Department for Molecular and Medical Virology at RUB. "As described several times before, copper in particular has a very strong antiviral effect." The team reports it did not detect any differences between the different mutants in terms of their sensitivity to different hygiene measures."